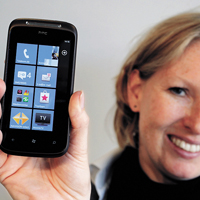 Microsoft unwrapped its much-awaited Windows 7 phones this week and the initial reviews suggest the phones are competitive. Experts say this time Microsoft has cleverly packaged features for business and young consumers. The line-up of nine new phones from Samsung, LG, HTC and Dell will be officially launched in stores later this month in Europe, and in November in the US on AT&T's network. The world's largest software maker, along with network carriers and handset makers, is expected to spend over $100 million on marketing the phones. According to research firm Gartner, currently Microsoft has just 5 per cent market share of the smartphone operating system market. Google's Android has a 17 per cent, Apple has 14 per cent and Symbian has 41 per cent market share.

Whatever Floats The Boat

The US Federal Reserve (Fed) is not done yet. The minutes of its September meeting — released this week — hinted the central bank is readying a new round of monetary easing. The minutes suggest Fed Chairman Ben Bernanke and his colleagues are closing in on a consensus to launch more asset purch-ases, known as quantitative easing. There is no clarifica-tion on the size of the buying programme though.

Currency rates remained at the heart of discussions at International Monetary Fund's annual meeting in Washington. Leaders of developing countries debated how high dollar inflows are causing their currencies to appreciate against the greenback. Experts say governments in emerging markets have little choice but to intervene. And action has already begun. Thailand has imposed a 15 per cent tax on capital gains from foreign investment in government debt to rein in baht. Japan says it will announce measures to weaken the yen. China said it would halt the gradual rise of yuan. India has also hinted at possible intervention. Brazil has already doubled a tax on foreign inflows to control real, its currency. Who says any money is good money?

Old is gold. US clothes retailer Gap scrapped a new logo after receiving over 2,000 comments — demanding the old logo be continued — on Facebook.  Mark Hansen, president of Gap Brand North America, said, "Gap did not go about this in the right way" and "missed the opportunity to engage with the online community".

One bitten, twice shy. Cnooc is not. China's top offshore oil producer will buy 33 per cent of Chesapeake Energy's Eagle Ford shale acreage in Texas, US, for $1.08 billion. This is the first time Cnooc is exploring contracts in the US market, since its failed bid for exploration and production company Unocal in 2005 due to intense opposition from

Drug maker Pfizer will buy King Pharmaceuticals for $3.6 billion in a bid to revive its earnings. The deal will significantly expand Pfizer's presence in the pain drugs market. In 2011, Pfizer will lose US patent protection on its iconic cholesterol drug Lipitor, the world's biggest-selling prescription drug.

They are not called the ‘better half' for nothing. According to Shanghai- based Hurun Report, more than half of the 20 richest women in the world are Chinese. Their average fortune has surpassed that of US talk show host Oprah Winfrey and author J.K. Rowling. The richest is paper recycling tycoon Zhang Yin, 53, owner of Nine Dragons Paper, with $5.6 billion. Wu Yajun, 46, of Longfor Property, is second with $4.1 billion and Chen Lihua, 69, of Fuhua International, ranks third with $4 billion.