Mumbai (Maharashtra) [India], February 3 (ANI): Streaming platform Netflix on Wednesday dropped a gripping and suspense-filled trailer of the much-awaited Hindi language mystery thriller film 'The Girl on the Train' featuring Parineeti Chopra in the lead role.
The 'Ishaqzaade' star took to Instagram and shared the trailer of her Netflix film in which Chopra essays the role of an Amnesia (memory loss) patient . 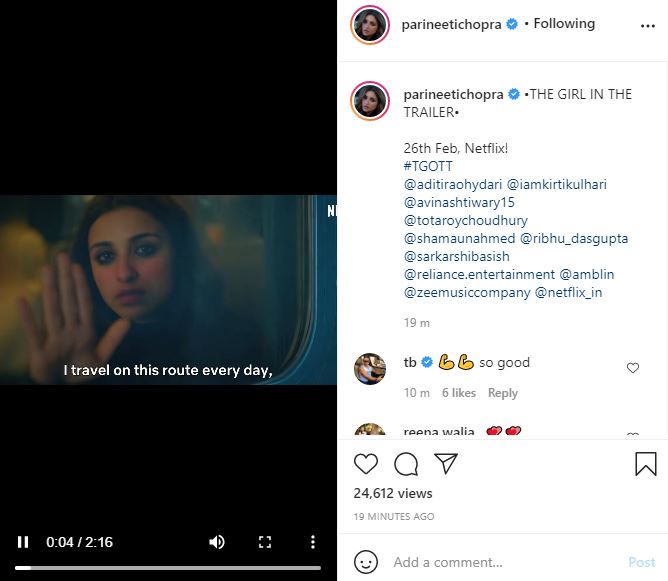 The one-minute fifty-five seconds trailer starts with a close up of London where one can see moving trains. The frame then captures Mira Kapoor (Parineeti) who travels through a local train each day and sees Aditi Rao Hydari and on watching her every day, Mira develops a connection with the distant stranger as she reminds Rajput of her past.
The video then shows Mira as she meets a tragic car accident with her husband, just before they were about to start their family life by welcoming a baby. On seeing Aditi living her past life, Mira gets through a line of emotions, including jealousy and self-pity. The clip then cuts to a shot when she follows Aditi through a forest, post which she is found dead in the forest.
Kriti Kulhari comes in as an investigative officer who doubts Kapoor of the murder and digs through the suspense of the murder mystery, during which she comes to know that Mira suffers from memory loss.
The trailer then shows flashes of the investigation and the events that occurred over the night of the murder, in between, Kapoor tries to remember the occurrence of events, all in dilemma.
The Netflix drama is a murder mystery with thrilling scenes and action sequences and is intriguing in every sense.
Taking to the caption, Chopra captioned the post as, "THE GIRL IN THE TRAILER*26th Feb, Netflix! #TGOTT."
'The Girl on the Train' is an upcoming Hindi-language mystery thriller film, which is an official adaptation of actor Emily Blunt's Hollywood flick that was released back in 2016. Besides Parineeti and Hydari, the movie also stars Avinash Tiwary, Ishita Dutta, Vatsal Seth, and others.
It is being helmed by Ribhu Dasgupta and bankrolled by Reliance Entertainment. The film is all set to premiere on Netflix on February 26. (ANI)