New Delhi [India], January 12 (ANI): Bollywood actor Kangana Ranaut on Tuesday paid her respects to Swami Vivekananda on his birth anniversary, describing the spiritual leader as her Guru from whom she has derived inner strength.
The 'Queen' star shared a picture of Swami Vivekananda and penned a note of gratitude on Twitter.
"When I was lost you found me, when I had nowhere to go you held my hand when I was disillusioned by the world had no hope you gave me purpose. There is no being no God higher than you my Guru, you own every bit of my being.... NationalYouthDay SwamiVivekanandJayanti," she said. 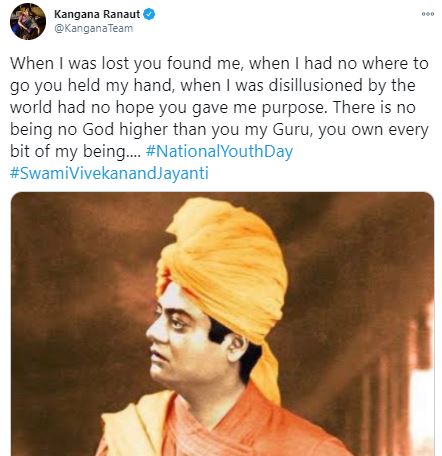 The birth anniversary of Swami Vivekananda is observed as National Youth Day.
Kangana Ranaut has started preparations for her next film 'Dhaakad', which will be helmed by Razneesh Ghai and produced by Sohail Makhlai. (ANI)