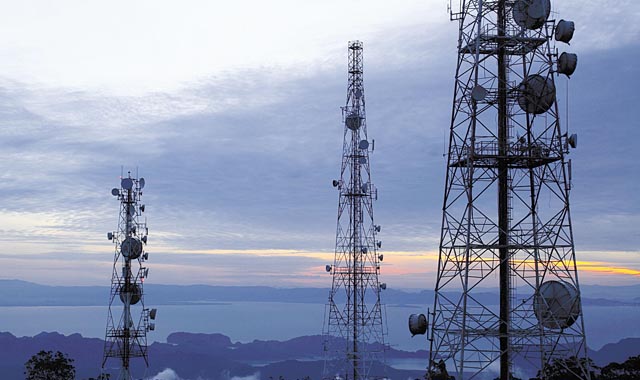 The government has promised to get tough with telcos. But will the consumers get a better deal in the blame game scenario?

Telecom companies in India have so far had one mandate — improving their profitability. Or so it would seem from the sheer decline in quality of service. So noticeable has this been that the central government has had to step in and try to salvage a situation that has become so bad that even the privileged class is not immune to it.

Any mobile user will vouch for how impossible it is to go through a complete conversation without the network hanging up on you, especially in peak business hours. Clearly, in the interest of growing a customer base and increasing average revenue per user, telcos have dropped the ball on calls.

Finally the government, with its own digital initiatives dependent on connectivity, put its foot down and announced a special audit, results of which will be used to penalise the laggards. Today, there is actually no operator in the country that can truthfully claim to be better than the others in terms of service. Consumers change providers only to find they still cannot hold a call. 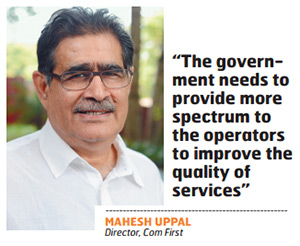 The Telecom Regulatory Authority of India (TRAI) conducts quarterly audits of telecom operators to rate quality of services. In the recent past, operators have not met the minimum standards set by the regulator. Some networks fail to control the call drop rate which is as high as 8 per cent compared with the minimum acceptable of less than 3 per cent in the worst affected cells. Others fail with connecting calls in the first place.

The telcos’ defence is that poor services are a direct result of the government’s policies. A shortfall in spectrum and restrictions in installing mobile towers is bound to have a fallout.

A Telecom Tussle
The telecom minister, Ravi Shankar Prasad has categorically said that his government has provided enough spectrum. In the last round of spectrum auction, the government gave away as much as 470MHz of airwaves. Prasad feels it is now the turn of the telcos to ramp up their infrastructure, failing which, a penalty is in the offing.

Telecom operators, counter the ultimatum with some international data. “There is not enough spectrum with the Indian telecom operators, says Rajan Mathews, director general, Cellular Operators Association of India (COAI): “In India, the average amount of spectrum per operator is between 12-15 MHz, whereas internationally it is 45-50 Mhz. How can you have better services with more subscribers and less spectrum?”asks Mathews.

Indeed, another reason for the poor quality of calls is the mismatch between the growth in subscribers and the growth of mobile infrastructure like base transceiver stations or mobile sites.

Hazards Ahead
Just when the Indian mobile sector was riding at formula 1 velocity, it hit a speed-breaker in the form of health activists. In the past three years, telcos have faced difficulties in installing mobile towers in residential areas. Even existing towers have been pulled down under pressure from Residents Welfare Associations. COAI data shows in the past three years around 186 mobile sites were pulled down in Delhi due to agitation by local residents. In Mumbai, the number of de-installed mobile sites was 120.

Gopal Vittal, MD and CEO of Airtel recently said in a media interaction, “We need both spectrum and more sites for mobile towers. In Delhi’s Lutyens area alone we need 217 sites, but we have only 117 sites.”

Prasad sides with the operators on this issue and quotes studies by the Department of Telecommunication (DoT) and World Health Organization (WHO) to support the installations of mobile towers in residential areas. While the DoT report categorically denied there was any proof that radiation from towers was a health hazard, WHO’s report has been inconclusive and has warranted more studies on the subject.

While Prakash Munhsi, who is spearheading the campaign disclaiming health hazards from towers, says that they are not against installation of towers, there is a need for a third party to assess radiation norms. “The mobile companies want to save the cost by installing fewer towers with more radiation. We have been telling the government to force the companies to use less powerful mobile towers to control the radiation levels. But the mobile companies use higher level of radiation to keep their infrastructure operational costs down,” claims Munshi.

It’s Complicated
Some experts believe that the Indian telecom companies have overspent on buying spectrum and do not have enough funds to upgrade the tower infrastructure. 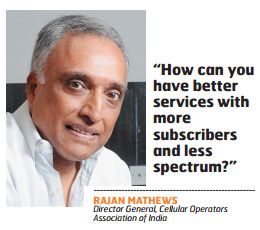 The spectrum auction of 2010 was fiercely fought between the Indian telecos. They shelled out around Rs 70,000 crore to the government for spectrum in the hope that the 3G services will help them recover the cost. In 2010, Bharti, the biggest telecom operator by market size as well as revenue, won 3G spectrum in 13 circles, bidding Rs 12,300 crore. This resulted in a debt pile up of Rs 10,233.10 crore on the company’s balance sheet in March 2011, an increase of 103 per cent from a debt of Rs 5,038 crore in March 2010. A part of this was also taken to buy business in Africa. But clearly, the company has been paying a higher interest outgo since then.

Mahesh Uppal, director at Com First, a telecommunication consultancy, says, “The government needs to provide more spectrum to the operators for the latter to be able to improve quality of services. At present, the government seems more keen to maximise revenues from spectrum auction by exploiting its scarcity. The two sides are simply not on the same page.”

Spectrum auctions in 2014 and 2015 have further dented the financials of the telecom companies, restraining their ability to create new infrastructure. In 2014-15, the telecom operators paid over Rs one lakh crore to retain spectrum that was up for renewal.

Global credit ratings agency Moody’s says: “These payments will cause debt levels to rise significantly for most operators, including Bharti Airtel (Baa3 stable) and Reliance Communications (RCom, Ba3 stable), and will limit their ability to make additional investments over the next 12-24 months, possibly slowing the rollout of 3G/4G networks in India.”

India has as many as 12 players in the telecom market, which not only increases the price of the bid during spectrum auctions but reduces the share of spectrum availability per operator.

Technical Troubles
Telcos use multiple technologies to provide services. No operator has the same wavelength in all circles. This leads to hand-off issues. So if a consumer has subscribed to 2G services from the operator and he travels to an area where his operator’s 2G network is congested, the operator cannot transfer the call to the 3G network. If operators were to use a single technology there would have been better network utilisation.

Mathews points out that countries like Korea, Japan and Sweden do not use 2G technology at all. The US is also gradually moving away from the 2G technology. In India, however, it would not be possible for operators to discard 2G because this runs on 900 Mhz frequency suited for voice services. “In India, 79 per cent of telecom revenue comes from voice and only 15 per cent from data,” says Mathews. Also, the operators have invested about Rs 5.62 lakh crore in current infrastructure. They would not want to write-off this investment so early.” 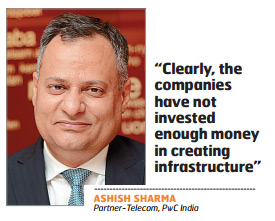 Glimmer Of Hope
If the government gets tough, telcos will have to improve their services, even if it means more debt on the balance sheet. Uninor gives a minute of free talk time in a 24-hour period for disconnections during a call. But, because Uninor is not a big player, compensating consumers does not force other companies to do the same. A government policy can do the trick for consumers.

Also, companies like Airtel are looking at new technologies to make up for lack of spectrum in different pockets of their circles. Recently, Airtel bought a minority stake in OneWeb which aims to build a communications network with an initial constellation of 648 Low Earth Orbit satellites. According to Sunil Mittal, founder and chairman, Bharti Enterprises, this will help improve the network in pockets that suffer from lack of spectrum or other technological glitches. Other companies will also have to invest more in their infrastructure to improve their services.

However, everything comes at a cost. Given the leveraged balance sheets of the companies, the only way out to improve services will be to increase the voice tariffs. But Indian consumers have been averse to tariff increase in the past. Even the government wants to keep tariffs low to increase cellular penetration. The choice then is between lower tariffs and better services.