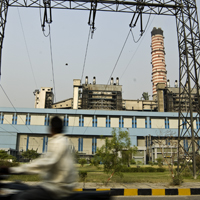 The floor price for the offer will be announced on 6 February, he said.

Share sales in state companies has been a key element of the government's plan to bring down its fiscal deficit to 5.3 per cent of gross domestic product by March-end to avoid a credit downgrade from global ratings agencies.

The government aims to raise Rs 30,000-crore by selling shares in the 2012-13 fiscal year to March. Last week, it raised Rs 3,100 crore through a 10 per cent stake sale in state explorer Oil India Ltd.

It expects to sell shares in four other state companies before March-end, Mathur told reporters.

"The EGoM has approved 9.5 per cent stake sale in NTPC. The stake sale will be made on February 7," Disinvestment Secretary Ravi Mathur told reporters in New Delhi.

When asked how much would be raised through the sale, Mathur said, "it would be as planned around Rs 12,000 crore".

He said the floor price, or the minimum offer price, would be notified to the stock exchanges on 6 February.

The department has recently completed 10 per cent stake sale of the Oil India (OIL) through the auction route raising over Rs 3,141 crore for the government. The government has raised over Rs 10,000 crore though PSU stake sale so far this fiscal.

Besides OIL, the government has raised Rs 6,000 crore from stake sale in NMDC, Rs 800 crore from Hindustan Copper and Rs 125 crore from NBCC.

The government's ambitious Rs 30,000-crore disinvestment programme got a boost on 23 November as the 5.6 per cent stake sale in Hindustan Copper was a resounding success, The government managed to raise Rs 810 crore in November, 2012

The government is banking heavily on disinvestment programme to rein in its fiscal deficit. It had revised the target to 5.3 per cent of the GDP. Global rating agencies have threatened to downgrade India's sovereign credit rating to junk if it fails to rein in its deficit, which is ballooning because of higher spending on food, fuel and fertiliser subsidies and poor tax receipts.