Muscling In On Indian Market 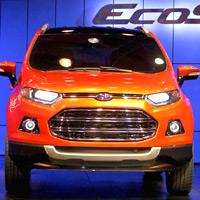 Local Edge?
Carmakers in Europe and the United Statdes like SUVs for their high margins, but in India's price-sensitive market, companies may struggle to make similar profits. High import taxes will also be a factor for models manufactured overseas.

As the SUV market continues to expand, that could encourage more carmakers to move production or assembly to India.

Ford said on Wednesday it would spend $142 million on its plant in Chennai to begin manufacture of a new global SUV planned first for the domestic market, and subsequently to be built for export.

Mahindra said its new Ssangyong SUVs would be assembled in India, avoiding high tariffs. Jaguar Land Rover, owned by Tata Motors, already assembles some of its luxury SUV models at its Indian plants.

Maruti, whose 800, Alto and Swift models are some of India's most recognisable small cars, has been hit particularly hard this year due to the slump in the segment. A new SUV concept car and the Ertiga, its first-ever MPV, is set to debut at the Expo.

As more and more players muscle in, the market is going to get crowded.

"For sure, everyone is coming to this segment, competition is fierce," said Park. "But we are ready for a fight."