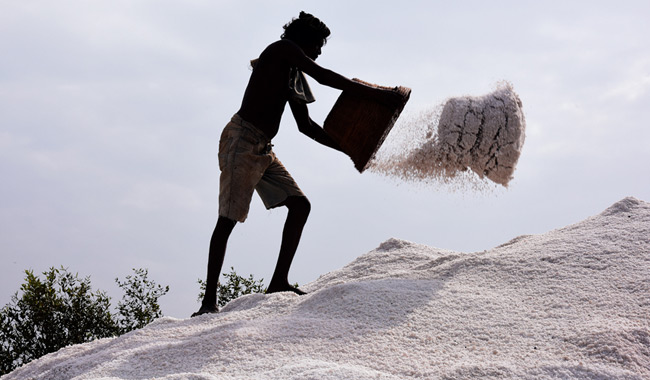 10 June, 2015
Print this article Font size -16+
From the time of Maratha and Portuguese rulers mumbai salt pans were active,and left forgotten, until recently it is making headlines as the city of mumbai gets more land hungry on the way to fast forwarding towards developments. Both the Centre and the government of Maharashtra have long been eyeing Mumbai’s salt pans  to rehabilitate slum dwellers and increasing infrastructure development.
(BW Photos by Subhabrata Das and Umesh Goswami)

The total span of salt pan areas in mumbai is around 5000 acres ,at least nine times more than the land it may acquire from developing defunct mill areas.

Most of the salt pan land is private , owned or leased and records goes back to the time of British raj.

Central government view that salt work lands belong to the central government, and that the salt manufacturers only have right of use to the land to produce salt under the terms of the licence.

At the meeting of a high-powered group of central ministers it was decided, in May 2008, that “efforts of various central and state agencies (will) be coordinated and urgent measures evolved for using these lands for rehabilitation of slum-dwellers,”

This decision fired a major blow to the environmentalists who argue that, a major portion of the land is covered by Coastal Regulatory Zone (CRZ) guidelines, and that these lands cannot be used for development. Besides, salt pans are part of the fragile ecosystem that supports numerous species of animals, birds and fish.

Moreover. it works as a buffer zone to a flood prone Mumbai .It is like a natural sponge which can soak up huge quantity of flood water saving the mainland .Especially after Mumbai had witnessed the deluge in 2005, environmentalists argue salt pans, with their thick mangrove vegetations, are Mumbai’s last defence against flooding.

Activists of mumbai argue that this redevelopment project by the MMRDA will encourage a certain section of construction lobby who wants few open spaces of mumbai left should be open for redevelopment.

Though Mumbai's commerce and real estate and construction community has welcomed the decision to redevelopment of salt Pan areas as low cost housing projects for displaced slum dwellers, it has evidence that in most parts of the world, where salt pans have been developed, there has been a spurt in the construction of high-end luxury houses and hotels due to the proximity of the sea.

Meanwhile the life at Mumbai’s far end suburb in a salt pan is as usual, migratory labour with lowest payment,extreme heat and blinding reflections from heaps of white salt, hazardous job without protective gears or any idea of it.
‘

Salt sucks blood, saheb’ , says one of the worker while showing me his blistered hands. He is Sanjay a  24 years old bare foot, a school dropout from navsari , but that's another story.