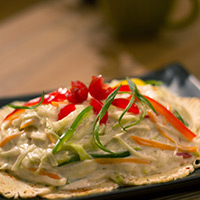 08 November, 2014
Print this article Font size -16+
The financial capital, notorious for its traffic snarls, has achieved a first in the country after a city-based pizza outlet used an unmanned drone to execute a delivery by taking the aerial route recently.
"All of us had read about (global e-commerce giant) Amazon's plans of using drones. We successfully carried out a test-delivery by sending a pizza to a customer located 1.5 km away from our outlet on May 11," Francesco's Pizzeria chief executive Mikhel Rajani told PTI today.
He stressed that this was only a test-flight but its results confirm that it can be used routinely in a few years.
A four-rotor drone took off with the order from its outlet in central Mumbai's Lower Parel area and delivered it to a high-rise building in adjacent Worli area, Rajani said, claiming that it is for the first time that the ubiquitous drone has been used for such a purpose in the country.
The eatery, which has been in operations for two years, has made a video of the delivery, he said, adding an auto engineer friend helped with making the flight possible.
Rajani, who comes from a family that is into textiles, said the drone saves time and costs for a company like his, which would otherwise depend on a two-wheeler borne agent to deliver the pizzas.
"What we have done now will be common place in the next four-five years," he said, adding every such customised drone costs around USD 2,000.
At present, there are certain restrictions on the regulatory front like the drone not allowed to fly above 400 ft altitude and barred from flying over security establishments, he said, adding the American Federal Aviation Authority's regulations on usage of drones, expected next year, will help.
Apart from that there are technical difficulties like a limited operating radius of 8 km after which the batteries go dry, he said, adding proper infrastructure like having charging stations can help.
Even though the four-rotor version drone had a limited carrying capacity, he said the payload capacity can be increased to up to 8 kg in case of a an eight-rotor drone.
Beyond the strategic applications, the drones are increasingly being used for a cross variety of purposes especially the ones centred around getting aerial imagery like getting videos at weddings, political rallies etc.
At present, Rajani said, the drones are being operated manually but added in future, we can have drones fly by themselves on predetermined flight paths made using GPS data.
During the test-flight, the drone picked up a box containing the pizza but bigger drones will be easily able to lift the special flask box which can protect the pizza from the atmospheric elements, he said.
(PTI)
Tags assigned to this article:
after hours lifestyle bumbai cafe pizz delivery drones