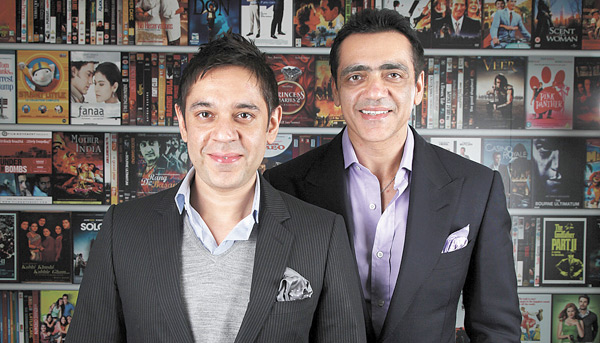 08 November, 2014
Print this article Font size -16+
From running the Amritsar Road Transport Company to becoming India’s largest multiplex operator is a long journey. Ajay Bijli was 25 when his father died in 1992. The young man inherited a trucking company and Priya, a single-screen theatre in Delhi’s Vasant Vihar. Then, a fire in the godown of his trucking company in 1994 changed his life. He decided that plying trucks was not his cup of tea and went in search of the multiplex revolution.

A milestone was reached when Ajay Bijli and his brother Sanjeev, promoters of PVR Cinemas, recently acquired the Cinemax chain from the Mumbai-based Kanakias for Rs 395 crore. The largest deal in exhibition, overshadowing Reliance ADAG’s acquisition of Adlabs in July 2005 for Rs 350 crore, has catapulted PVR to the No. 1 spot in the industry, with 351 screens.

Adding Silver
Ajay Bijli had a dream, but in 1995, with one screen and very little money, few were willing to buy into it. Luckily, Australian entertainment giant Village Roadshow was in an expansion mode, and Bijli coaxed it into a partnership. Priya Exhibitors and Village Roadshow entered into a 60:40 alliance and Priya Village Roadshow (PVR) was born. “They wanted to demolish Priya to build a multiplex; but it was doing well. So I spotted a decrepit theatre in Saket, Delhi — Anupam; that is where PVR set up India’s first multiplex,” recounts Ajay.

In 2003, when PVR was just a 12-screen operation, the Bijlis went on the hunt for funds again. Renuka Ramnath, then CEO of ICICI Venture, saw the opportunity and picked up a 38 per cent stake for Rs 40 crore. Meanwhile, Village Roadshow took a huge hit internationally and decided to exit from several markets, including India, in 2003. The Australian company, however, allowed the Bijlis to continue to use the PVR brand; but without the full form. The acronym has since stuck.

PVR for the first time moved out of the National Capital Region in 2004 when it opened an 11-screen multiplex — the largest in the country — in Bangalore’s Forum Mall. By then the media and entertainment sector was buzzing with the Adlabs takeover by Anil Ambani. PVR scaled up further with an initial public offering in 2006 that brought in much-needed funds — Rs 128 crore. ICICI Venture used the opportunity to cash out at a three-fold appreciation. Interestingly, Ramnath’s faith in PVR remained and, in her later avatar as promoter of Multiples Private Equity, she partnered PVR for the Cinemax acquisition, investing a hefty Rs 153 crore for a 16 per cent stake.
However, it has not been an easy game. Multiplex exhibitors have had a tough time with poor content and high ticket prices forcing low occupancies of 20-30 per cent. It is no surprise that the industry has seen several rounds of sell-outs and consolidation. In November 2009, DLF-owned DT Cinemas sold its 29 screens to PVR in a cash-cum-share deal valued at around Rs 60 crore. Later, Mumbai’s Fame theatres sold its 95 screens to Inox.

Hits And Misses
It has not always been smooth sailing for PVR. The Bijlis diversified and some of their investments went awry. In 2007, Aamir Khan approached them to co-produce two movies. It was too good an offer to refuse, and the films — Taare Zameen Par and Jaane Tu... Ya Jaane Na  — did well. PVR also branched out into allied areas such as bowling alleys under a 100 per cent subsidiary, PVR Leisure, in which L Capital picked up a 10 per cent stake for Rs 60 crore. Simultaneously, the company entered film distribution, releasing a few Hollywood titles such as the Kill Bill series. Sanjeev Bijli, who handles the distribution business, says: “We have focused on English and Hollywood movies with about 20-25 releases a year.”

Distribution and movie-making came under the subsidiary, PVR Pictures, for which the promoters raised equity of Rs 120 crore from J.P. Morgan and ICICI Venture. The company launched  seven more films, but this time with tepid results. The shocker came when the big-budget Ashutosh Gowariker film Khelein Hum Jee Jaan Sey bombed and set the company back by a whopping Rs 30 crore. “The loss wiped out whatever profit we had made in film distribution. Our stock fell to Rs 88. I was devastated. I said: No more movies,” says Ajay.

Back To Basics
On the rebound, the brothers became more focused on exhibition. “The investors, the hardcore PE guys kept us on our toes; we kept an eye on every screen to ensure its EBITDA return was 20-25 per cent; we had a better per-screen revenue than any of our competitors,” says Ajay.

The focus was on good infrastructure to enrich the ‘cinema experience’. “The demands of the Indian consumer are not big. He wants crisp popcorn and of course clean loos. If I can give him that, he will come back.” There are infrastructure roadblocks though. While India is under-screened, the multiplex chains are limited by the link-up with luxury malls. Standalones are difficult, while mall development too has hit a bump with builders going slow in recessionary conditions.

Ajay, however, strikes an optimistic note. “FDI in retail has just opened and India is learning the mall experience. I see the high street culture going out, and the malls will open up again.”