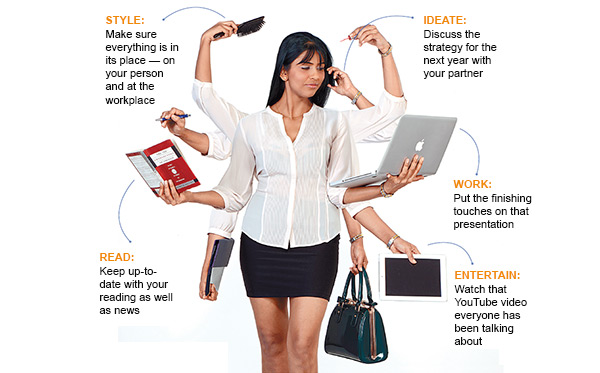 08 November, 2014
Print this article Font size -16+
Multitasking is, for heaven’s sake, something that machines are supposed to do — not people. Multitasking is originally an engineering term that, unfortunately, turned into corporate blackmail. If you can’t juggle three projects, lend a sympathetic ear to a troubled colleague, take 17 phone calls, grab a sandwich, and write five reports, all while being actively — and visibly — participative in back-to-back meetings, you’re sliding down the corporate ladder faster than you’re climbing it!

I haven’t forgiven an ex-boss for giving me an exasperated look every time I balked at simultaneously handling 2-3 “equally critical” assignments. “Just do it in parallel!” he would squawk in frustration when I’d ask how I was to divide my time without delaying one or the other task. There never was an answer.

The truth is that multitasking is a big fat myth that — to the amazement of many — doesn’t even result in overall improvement in productivity. In fact, quite the opposite. A 2010 study by Peter Bergman found that multitasking actually causes a 40 per cent drop in productivity. It also leads to more stress and a 10 per cent drop in intelligence. How’s that for something to chew on?

The problem with multitasking is that it looks really good to everyone. We feel satisfied with ourselves for juggling tasks successfully — though the success is debatable. A certain ophthalmologist I know appears to do a brilliant job-job-job of it. He invites 3-4 patients into his consulting room, and proceeds to look through his apparatus at one person’s eyes, writes out a prescription for another, schedules surgery for a third, and explains — in detail — the nature of the problem to a fourth. Every now and then, a patient loses patience. Once a co-patient snapped, demanding to know if he even remembered his case. Without blinking, the doctor shot back an accurate and detailed reply! Whether the good doctor would be more efficient were he to focus on one patient at a time, we’ll never know.

Another multitasking enthusiast I know replies to his emails, tweets, shaves and drives through Delhi traffic all at the same time. Apparently, all the trucks are supposed to get very frightened and scuttle out of the way. The risk of making mistakes is pretty obvious in the case of driving. It’s with this example that it’s easier to see how the human mind doesn’t really multitask at all — it switches quickly from one task to another. That’s outright dangerous and otherwise stressful and damaging to one’s brain. A 2009 study by Stanford University showed that the ability to focus, control memories and switch from one context to another becomes impaired for multitaskers.

But, so many jobs just can’t be done without multitasking. Take, for example, a restaurant manager. Managing staff, remembering each order, dealing with the fact that there are no more oysters in the freezer — can’t be tackled one at a time. This just means there’s no escaping multitasking.

Technology, especially mobile tech, has come along and practically deified multitasking, making it seem intrinsic to humankind — which it isn’t. The smartphone is practically a multitasking wizard —letting you talk while you eat, work while you wait, read while you drive, listen while you sleep or write while you walk. Newer smartphones offer enhanced multitasking abilities such as split screens and smaller video screens that go on top of another app. So whether it’s work or play, multitasking is being baked-in more and more. Social media has brought in a whole new layer of multitasking. Share a photo while on holiday, tweet ferociously from a conference, check-in every 2 km.

In an existence filled with beeping gadgets and notifications, our brains are in for quite an assault. Here are some things one can do to keep that multitasking from going completely out of hand:

— Learn to re-focus. The mobile devices that bombard you with notifications are the very things that can help too. An app called Brain Waves — and its ilk — will feed your ears with white noise or tone that is supposed to simulate, and stimulate, the brainwave pattern of focus and concentration. To re-focus, schedule your tasks to finish tasks one at a time and take a moment to feel good about watching your list grow smaller. Don’t add more items just yet.

— One trick people use is to designate an object, such as a marble, and place it in front as a reminder to focus on a task. That way, if a phone call grabs your attention, you won’t lose your way when you finish and will take up right where you left off.

It may well look as if the harmful effects of multitasking are exaggerated. But accomplished multitaskers should just try focusing on one thing to see how thoroughly the focus habit has been affected. The time, and toll, taken to switch from one thing to another ends up making us permanent switchers.

In the writing of this article I have made and drunk a cup of tea, shooed noisy pigeons 16 times, called my contractor twice, chatted on Whatsapp, eaten a piece of chocolate, answered seven emails, and checked my Twitter account eight times. Clearly, urgent intervention is called for.