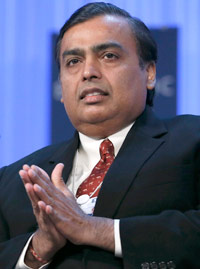 08 November, 2014
Print this article Font size -16+
India's leading industrialist brothers, Mukesh and Anil Ambani, have been together listed as 20th richest in the world in the Sunday Times Rich List 2013.

The brothers, who have separate industrial empire in India, have been clubbed together under the category of Petrochemicals and they are jointly assessed worth 17 billion pounds as against 19 billion pounds last year.

The Hinduja brothers, Srichand and Gopichand Hinduja, Chairman and Co-Chairman respectively of the Hinduja Group, are 47th richest in the world with a fortune worth 11 billion pounds in 2013 as against 9 billion pounds last year.

The Walton family of the US, who own Supermarkets (Walmart), are the richest in the world with a 90 billion pounds fortune in 2013 as against 51 billion pounds last year.

Meanwhile Steel tycoon Lakshmi Mittal's wealth has plummeted while Lord Swraj Paul has emerged as the wealthiest Peer, according to the list. Mittal, 62, who spent eight years at the top of the list, has dropped down to fourth position this year, with a fortune of 10 billion pounds, 2.7 billion pounds less than last year.

"So, after eight years on top of The Sunday Times Rich List, the steel maharajah is no longer No.1," the report said. It said, "the 40 per cent stake Mittal and his wife Usha hold in the steelmaking giant ArcelorMittal has plummeted from 28 billion pounds at its peak to 5.95 billion pounds."

Noting that "the Hinduja brothers are on a roll," the Rich List 2013 said, in the past year "the stock market value of their IndusInd Bank shot up from $2 billion to $4.6 billion, while the acquisition of the American company Houghton International by their Gulf Oil for $1.1 billion was the largest Indian investment outside India last year."

Russian billionaire Alisher Usmanov, 59, who has a near 30 per cent stake in Arsenal Football Club, is the richest person in Britain with a fortune worth 13.3 billion pounds. The list's biggest gainer over the past year is another Russian tycoon Leonard Blavatnik, who ranks second with his wealth of 11 billion pounds.

According to the list, Lord Paul, Chairman of the Caparo Group, is the richest Peer in the House of Lords with a fortune worth 2 billion pounds. He stands at 38th position. Lord Paul's fortune has been boosted by profits from his Caparo steel and engineering firm, the report said.

The highest placed UK-born person is Gerald Grosvenor, the Duke of Westminster, who is worth 7.8 billion pounds and ranked eighth. London-based Ravia Ruia, one of India's leading industrialists, is 24th in the list with a wealth worth 2.55 billion pounds - up 550 million pounds over the previous year.

Anil Agarwal, Chairman of Vedanta Resources, the London-quoted Indian metals-to-oil group, is 35 in the list with a wealth of 2.2 billion pounds, down 50 million pounds over the previous year.