Motorola’s Googly Of A Phone 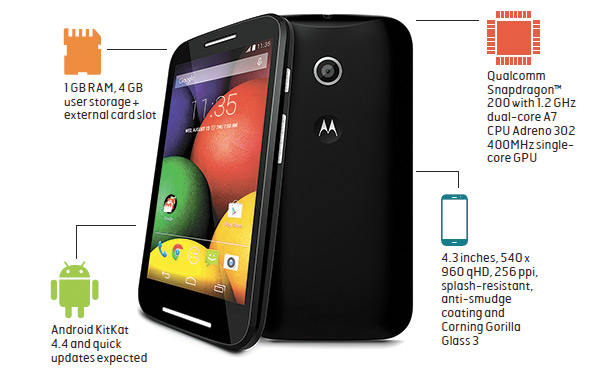 08 November, 2014
Print this article Font size -16+
These  days  if anyone asks for a recommendation for a decently priced smartphone, I immediately think Moto-something. The Moto X and then the Moto G offered a great Android experience for half the price of other brands. And, now, the Moto E takes the cake.

At Rs 6,999, we have a device that Flipkart ran out of in a day or so. Stocks get replenished, but lapped up again as Android fans on a shoestring budget head to the online store — the only route the Moto E that is available.

Obviously, that means you can't see and feel it in a shop, but enough reviews and users will tell you that it's fantastic value for money. There’s no doubt that all the other phone makers squabbling for a share of the sub-Rs 10,000 market now have serious trouble on their hands. The fact that the Moto E is only available online and won’t easily reach first-time buyers in rural India, where Motorola has no mindshare, is the only saving grace for them.

Not light, not heavy, not big, not small — the Moto E is well-built and well-designed. It looks similar to the Moto G and Moto X, though it’s a little thicker and heavier. It’s all excellent material at the front and back, and has the ergonomics down pat. Its glass face — Gorilla Glass 3 — gleams out at you and the back is rubberised; and even though greasy fingers will smear it, you can easily wipe it clean. The phone has gently rounded corners and softened edges that meet the slightly curved back to make the phone very easy and comfortable to hold. Perfect for someone who makes a lot of calls — and it’s a dual SIM, just the way buyers in India, especially in the low-cost segment, like it. The Moto E has a wonderful grip, both because of its size and the material on the back panel. The white version could get dirty if you’re not careful. Theoretically, you can also change backs, provided the back panels are available when you need them.

Like the other two Motos, but even more so, the E doesn’t bank on specs to be a worthwhile device. That’s one of the refreshing things about this series, so far. The Moto E’s specs are, in fact, outdated. Who looks at a dual core any more when even inexpensive phones are quad cores. And just 1 GB RAM? A tiny bit of storage space? On the other hand, the phone runs the latest Android version and will get updates quicker than others. We hope!

Even the screen is low-res compared to what you get these days. And, yet, its colours pop out and it looks just fine and  there’s not too much compromise on viewing angles.

Without much skinning and trickery, the Moto E works smoothly. Not super-fast, but good enough for many things, including moderate-level gaming. Navigation is the smoothest. Movie watching is good, social networking is fine and so are all the Google functions you get on an Android phone such as Google Now and Maps. The battery is a 1980 mAh and should last you the day if you don’t use it heavily. So what’s to dislike?

Well, the camera. We have on board a mere 5 MP rear camera — no front camera, so no grainy selfies. You can capture a car number with it, a big flower outdoors, but forget about really getting into the joy of mobile photography with this little thing. There isn’t even a flash, though there’s a collection of filters and effects including panorama and HDR. You don’t get 720p video recording.

If there’s one thing to miss, it’s really the cameras considering how quickly that becomes important to users even if they didn’t think they wanted it in the first place. But then, all arguments come to a screeching halt at the price. If Motorola were to go up the alphabet a little more, one could have a phone that would kill off the feature phone.