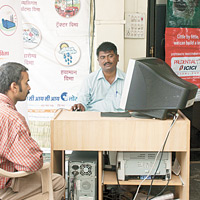 It is a decade since Stuart L. Hart and C.K. Prahalad wrote the article on the fortune at the bottom of the pyramid, spreading the idea that profits can be made by serving the market offered by the poor, provided the entrepreneurs concentrate on supplying a product or service at a low cost. Although they did not say it in so many words, they implied that doles and subsidies were not the only way of making the poor better off; there were neglected profit opportunities in poverty alleviation.

It was a fascinating idea; it struck an echo in India as well. The past and present finance minister supported it in his budget speech in 2005. Amongst those that responded to his call was the RBI, which asked banks to achieve financial inclusion. It is almost seven years since the RBI asked banks to let poor villagers open no-frill accounts. They were supposed to be accounts without any balance or small balances; the banks could put any restrictions they wanted on the transactions. The result was predictable: pretty much nothing happened till 2010. Then the landscape changed rapidly. For some years the government had been giving employment under MGNREGS. The money it gave out was being misappropriated by politicians and civil servants, who cooked up record books and collected wages in the name of fictitious workers. As part of an attempt to end this racket, the government asked banks to get more active with the opening of no-frill accounts, into which the wages could be deposited. As a result, the number of bank branches rose from 54,000 to 147,000 in the two years to 31 March 2012, and the number of branches being operated by banking correspondents increased from 32,000 to 120,000. The number of no-frill accounts rose from 49 to 103 million. So banks can rest easy, and the RBI can congratulate itself on having done its duty.

There are, however, occasional glimpses of the reality behind these figures. One of them comes from Cuddalore district, which was the first to report 100 per cent financial inclusion; it was studied by the RBI’s own college of agriculture in Pune. The researchers visited the households that had been reported unwilling to open bank accounts, and found that the interviewers had in many cases just marked them as being unwilling without actually asking them. In areas where a high proportion of households was reported as willing, they were surveyed by bank staff themselves, who were keen to get their accounts. Financial inclusion required initiative and energy from bank staff, and their motivation was weak because they thought rural banking could not make profits, and were not rewarded for covering rural households.

Another finding of the Cuddalore study was that only 4 per cent of the households that had opened accounts had done any banking operations in the year following the opening. Some of the households did not have money to save; but many had accounts in branches far away; it was just not worth their while to walk 10 miles to deposit Rs 10. When they went to the branches, they often found them closed, or operatives missing. The quality of service was poor, and unadjusted to the character of the clientele.

Why did they open accounts in such faraway branches in that case? Many of them had been persuaded by presidents of Gram Panchayats and such other influential people, who had said that the banks would lend them money. When they found the banks unwilling, they lost interest. Villagers need credit, and take a lot of it from a number of sources. But banks are not a preferred source because they are so remote and their service is so poor.

Obviously, rural banking was not a complete failure; some villagers had used some branches. Balances went up much more in private and in cooperative banks, and much less in public sector and rural regional banks. Managers’ initiative and energy played an important part; they were lacking in government banks and rural banks. Rural banking can be made profitable, but it requires a different business model: low-cost local staff close to villagers, and continuous effort to make banks useful. The public sector model is quite inappropriate for rural banking. That is why it has progressed so slowly in India and, more importantly, why it has been reported to be more successful than it actually is. The RBI wakes up every few years, exhibits a few statistics, and likes everyone to believe that banks are penetrating villages. The first thing it needs to do is honest, objective surveys into the real state of financial transactions in rural areas. And rural banking will wake up only when the RBI allows new forms of enterprise into it.