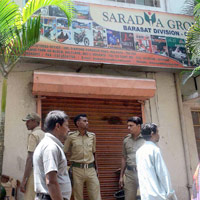 Amid continuing public protest against the group's alleged fraudulent activities, Sebi in a late night order also barred Saradha Realty India and its Managing Director Sudipta Sen from the securities market till it winds up all Collective Investment Schemes (CIS) and makes the refund.

A senior official said that Sebi is continuing with its probe into a number of other companies belonging to the group headed by Sen, who was arrested in Kashmir valley yesterday.

At least ten companies are currently being probed for possible violation of CIS regulations of Sebi, the official said, while adding that role of Sen and other top executives associated with these entities was also being investigated.

The official said that all of the entities might not have raised money through CIS products and there are indications of numerous chit funds having been also operated by the group.

While CIS activities are regulated by Sebi, the chit funds and MLM (Multi-Level Marketing) firms largely come under the jurisdictions of state governments.

Complaints have been received by the Union Corporate Affairs Ministry and the Reserve Bank as well for alleged irregularities by various Saradha group companies, which in turn have alerted the concerned agencies including those of the West Bengal government about the matter.

However, the complaints against most of them are related to large-scale pooling of public money with promises of hefty returns in cash or in form of real estate and other assets.

The deposits sought from the investors ranged from thousands to lakhs of rupees per person.

Sebi also warned of launching a criminal case for "fraud, cheating, criminal breach of trust and misappropriation of public funds" and initiation of winding up of the entire company through a reference to the Ministry of Corporate Affairs, if its orders are not complied within three months.

During the probe, the company once sent 28 cartons of documents to Sebi, but the regulator refused to accept them and asked it to avoid "furnishing irrelevant and extraneous documents and furnish only the required information".