More Bang For The Buck 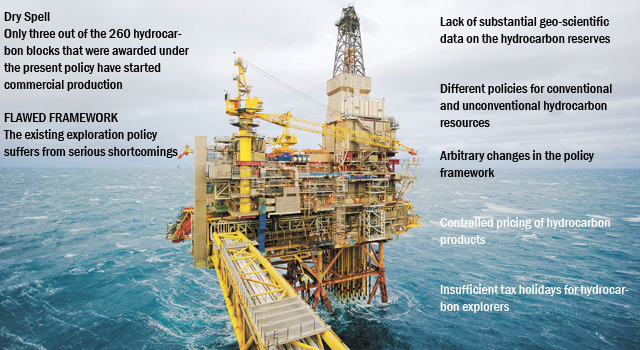 08 December, 2014
Print this article Font size -16+
Is auctioning of energy resources the best way to increase production? India’s hydrocarbon sector would  prove to the contrary. After 15 years and nine rounds of auctions under the New Exploration and Licensing Policy (NELP), the country awarded 260 hydrocarbon blocks to the private sector, but only three of them have started commercial production. This is why India imports 75 per cent of its fuel, which accounted for one third of its import bill of $168 billion (Rs 102,480 lakh crore) in 2013-14. Out of the three blocks, one is under arbitration: the contractor has been accused of misrepresenting the investment figures and the government has levied a penalty of over $2 billion on him for not producing the projected quantity of gas.
The NDA government has decided to overhaul the hydrocarbon policy, although the recommendations for doing so were prepared by a committee appointed by its predecessor, the UPA government. The government has prepared a draft Model Revenue Sharing Contract (MRSC), which seeks to plug loopholes in the existing policy and create a more conducive and competitive environment for attracting foreign firms to invest in India’s hydrocarbon basins.
The Fine Print
For one it is a comprehensive policy for the entire hydrocarbon sector. Earlier, NELP was only for the oil and gas sector while hydrocarbon resources such as coal bed methane (CBM) and shale gas were governed by separate policies. But a  merger of all policies into one has been demanded by the industry for years. The new policy proposes a model that would not allow cost recovery of investments to the company. Rather,  the company has to indicate how much oil and gas it would share with the government at different stages of production as well as at different rates. Also, the government’s revenue share would be determined by the production price matrix.
“The government’s revenue share of crude and/or natural gas shall be determined based on a two-dimensional production-price matrix, where the government’s revenue share with the contractor(s) shall be linked to the average daily production in a month and the average oil and gas prices during the same time,” reads the draft MRSC. Besides quoting the quantity the companies would share with the government at different levels of production, the former would be required to quote the quantum at different price levels — for example, at less than $100 per barrel, $100-125, $125-150 and over $150 per barrel for crude. For gas, the draft policy proposes four price bands: starting at under $6 per million British thermal unit (mmbtu), it goes up to over $14 per mmbtu, with $6-10 and $10-14 in between. The production levels for onland, shallow offshore and deepwater have been proposed in different tranches.

Under the cost recovery model, companies would bid for maximum work programme (the amount of capital to be invested) and the government would get its revenue only after the company recovered its investments. This model was criticised by the comptroller and auditor general as it encouraged companies to keep raising the cost so as to postpone higher share of profits to the government.
Pros And Cons
Analysts say that in developed countries the cost recovery method works due to the trust between the government and companies. In India, there is always suspicion over the investment figures drawn up by a company. This is why the revenue sharing model is better. “It is about the cultural difference,” says an analyst with an international consultancy firm. “In India, the private sector hasn’t won the government’s trust. So, the cost recovery method created problems.”
That there is lack of trust between the government and the investors is substantiated by the introduction of the escrow account in the MRSC. According to the guidelines in the draft, the contractor has to deposit in an escrow account the entire revenue from the sale of oil and gas. Any withdrawal from the account would be decided by the government.
P. Elango, former chief executive officer of Cairn India, questions the logic of the escrow account. “It is for short-term transactions,” he says. “In the oil and gas sector, contract terms extend to over 25 years. Investors would be disappointed if they do not have direct access to revenue.” He believes that by making the escrow account mandatory, the government has killed the spirit of trust that is necessary between two parties to work for a long time. R.S. Sharma, former chairman of Oil and Natural Gas Corporation, also criticises the escrow account clause and wants the government to withdraw it.
The draft policy differentiates between the levels of challenges that the geography of a block poses for an explorer. Hence, the government has proposed different timelines for the submission of the appraisal programme based on different categories such as ultra deep water, high temperature, tight reservoirs, etc. For onland and shallow water blocks the timeline has been increased from 34 months and 10 days to 60 months and seven days; for deep water blocks, it works out to 66 months and seven days, from the earlier 46 months and 10 days.

The government has tried to make companies accountable for their production projections. If an operator does not produce the oil or gas promised under the annual programme quantity, he will be penalised as per a clause in the MRSC. For example, Reliance Industries, the operator of KGD6 basin, had projected that it would produce 80 million metric standard cubic metres of gas per day (mmscmd), 2012 onwards. But it has been producing only 8-15 mmscmd of gas for the past two years. “If a contractor falls short by over 25 per cent of his projection in any year, liquidated damages of 10 per cent of the value of the shortfall will be imposed on him,” reads the proposed policy.
While preparing the draft MRSC, the government has tried to walk a tightrope: plug the loopholes that were exploited by the contractor in the KGD6 basin, but allow flexibility in the timelines for bringing discoveries into production. Comparing the existing production sharing contract (PSC) with the draft MRSC, former secretary to the government of India E.A.S. Sarma says: “PSCs incentivise gold-plating of investments and over-invoicing of costs permitting money laundering. The MRSC averts these possibilities, but ends up leaving scope for understating potential production schedules to escape penalties and under-invoicing revenue accruals to profit at the government’s expense.” The final policy will incorporate some changes taking into account the suggestions of the stakeholders. Whether the overhaul will help India ramp up its hydrocarbon production will be known in the next four to five years.
(This story was published in BW | Businessworld Issue Dated 15-12-2014)
Tags assigned to this article:
magazine in depth ongc upa nda nelp neeraj thakur magazine 15 december 2014 p elango mrsc rs sharma