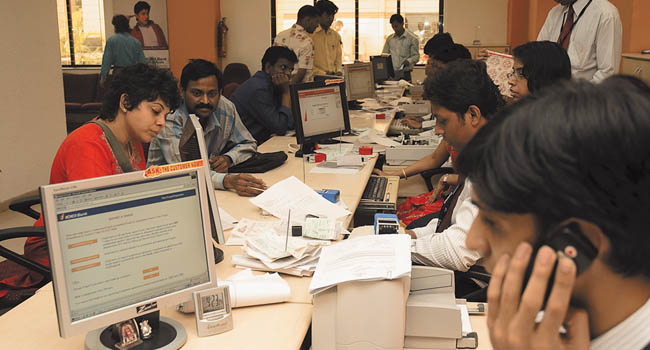 17 November, 2015
Print this article Font size -16+
At long last, we have something to cheer about, but there’s still have a long wait ahead before we are out of the woods.
The good news first. Moody's Investors Service on Monday upgraded its outlook for our banking system to 'stable' from 'negative' – there’s to be a gradual improvement in the operating environment (for banks) will lead to lesser growth in bad loans in future. The not-so-good bit is while the stock of non-performing loans (NPA) may continue to rise, the pace of new impaired loan formation in the current financial year ending March 2016 will be lower than the levels seen in the past four years – or in effect the run-rate of NPAs will taper off.
Moody’s stance today is a reversal of the negative outlook assigned to the Indian banking system four year ago (November 2011).
Said the rating agency: “The stable outlook on India's banking system over the next 12-18 months reflects our expectation that the banks' gradually improving operating environment will result in a slower pace of additions to loans problem, leading to more stable impaired loan ratios," Moody's VP & Senior Credit Officer Srikanth Vadlamani said.
Moody's, however, said the capital levels of state-run banks are low and the government's announcement to inject Rs 70,000 crore into these banks over the next four years is a "clear positive". It added “But this amount is still short of the banks' overall capital requirements. Ability to access equity capital markets remains key if these banks have to address their capital shortfall," it said, adding high capital levels are a credit strength of private-sector banks.
Moody’s expect India's real GDP to grow at 7.5 per cent in the fiscal end-March 2016 and at 7.6 per cent in the next fiscal.
“These growth rates would be slightly faster than the 7.4 per cent recorded in fiscal 2015 and substantially better than from fiscal 2013 to fiscal 2014. The Reserve Bank of India will likely maintain its accommodative stance over the outlook horizon, supporting the operating environment for banks”, it noted.
What’s the big worry?
Indian banks have significantly tightened their underwriting standards, as seen in the sharp slowdown in corporate loan growth to 9.3 per cent over the past three years from 23.1 per cent during 2009-12. That’s a reference to the fact that banks decided to slam the brakes on credit growth as the dud-loan mountain ballooned.
Consequently, corporate loans originated since 2013 mostly do not represent a material risk to asset quality, says Moody’s. For loans originated in 2009-12 that are currently under duress, the key issue from an asset-quality perspective is mostly one of recognition of already existing problems, rather than incremental stress in the underlying operating environment. While there has already been a significant recognition of impaired loans, the steel and power sectors in particular will likely see higher levels of new impaired loans. Steelmakers are facing sharp price declines and increased competition from higher imports from China.
And here is what has not been taken on board by banks. For the power sector, while 22 per cent of loans were recognised as stressed as of end-December 2014, this percentage largely represented exposures to state distribution companies.
“We expect that significant underlying stress in the power generation segment that is not yet reflected in the banks' impaired loan ratios will start to be recognised”.
You will come to know of that quantum over the next fortnight!
Tags assigned to this article:
Moody's banking bad loans npas corporate loans capital