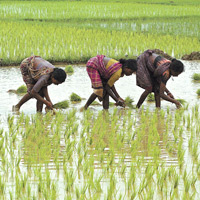 Rathore said that there was "sluggish march" in the onset phase. Monsoon normally hits Kerala on June 1 but this year, Met department had predicted that it will hit the state on June 5.

Since yesterday, the MeT department had been keeping a close watch on the rainfall and the wind pattern in the region before declaring the arrival of monsoon.

"We have 13 stations in Kerala and one in Karnataka that have recorded more than 2.5 mm of rainfall over the past two days-- one of the most important criteria to declare its arrival," said Rathore.

Continuous rain for over 48 hours with a westerly windspeed of 15 to 20 knots is among two critical parameters for declaring the arrival of monsoon, which is crucial for the country and its agro-based economy.

Rainfall occurred at many places over Kerala and at a few places over Lakshadweep and north interior Karnataka.

After four years of normal and above-normal monsoon, India is expected to have below normal monsoon this year with rainfall projected to be 95 per cent, which will be disappointing for the farming community.

Officials in the weather department had said the monsoon is expected to be below normal because of El-Nino effect, which is generally associated with the warming of ocean water.