Monsoon Deficit Comes Down To 8%; Pulses To Be Hit 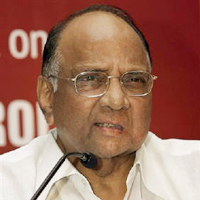 08 November, 2014
Print this article Font size -16+
Monsoon rains have revived and deficit has come down to 8 per cent so far this year, still the government expects fall in production of pulses and coarse cereals during the Kharif season, agriculture minister Sharad Pawar said on 13 September. The productivity of rice could also be affected but there would not be problem in meeting domestic demand, he said, adding that the government continues to export products like wheat, sugar, non-basmati rice and cotton.
"Monsoon deficiency has come down to 8 per cent and the situation has improved. The sowing situation of coarse cereals and pulses production does not indicate that production will be at last year's level," Pawar told reporters here. "Rice productivity will be affected as water was not available at right time. But there won't be supply problem to meet the domestic demand," he added.
Monsoon, lifeline of Indian agriculture, has revived in last one month but Karnataka, Maharashtra, Gujarat and Rajasthan continue to face deficit. These four states have declared drought in more than 390 taluks, prompting the centre to announce various relief measures to tackle the crisis. India produced a record 104.32 million tonnes, while pulses output stood at 17.21 million tonnes and coarse cereals 42.01 million tonnes in 2011-12 crop year (July-June).
Pawar pointed out that 78 per cent of the country has received normal rains or excess rains so far, whereas 29 per cent has received deficient rains. "Deficient monsoon has impacted sowing. There has been significant improvement in sowing position in the last few days. The gap in area is significantly high in Gujarat, Karnataka and Rajasthan," he added. Pawar felt that the revival of monsoon augurs well for rabi crops. "It will be good for wheat crops".
On agri-exports, Pawar said, "Right now, the export policy on rice, wheat and sugar continues. Rice, wheat and sugar stock is good and exports have been good. About 1.5 million tonnes of wheat, 4 million tonnes of non-basmati, 2.5 million tonnes of sugar and 14 million bales of cotton has been exported so far. The policy continues. The government is grappling with the problem of plenty as its godowns have a foodgrains stock of 72 million tonnes so far against the storage capacity of 74 million tonnes.
(PTI)
Tags assigned to this article:
economy india news 7 agriculture sharad pawar food grains rice productivity