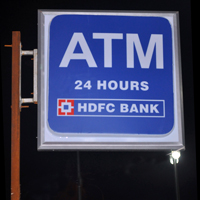 "The bank has appointed accounting and audit firm Deloitte Touche Tohmatsu India to carry out an independent forensic enquiry into the allegations and reported statements, as made by Cobrapost representatives, when secretly taping bank officials," HDFC Bank said in a statement.

Besides, the bank has also appointed Amarchand & Mangaldas & Suresh A Shroff & Co to examine the breaches, if any, of the banks Code of Conduct & Ethical Standards, by any bank officials, it said.

The bank has also suspended 20 officials concerned till investigations are completed, sources said.

Meanwhile, another bank named in the sting operation Axis Bank said a thorough internal enquiry is already underway to look in to all aspects of the matter and the findings are expected shortly.

Pending the enquiry, the bank has advised 16 employees concerned to report to respective administrative offices, Axis Bank said in a statement.

Earlier this week, the portal Cobrapost had played the contents of a purported video recording of officials of private banks including Axis Bank, allegedly agreeing to receive unverified sums of cash and put them in their investment schemes and benami accounts in violation of anti-money laundering laws. .

The footage taken in 'Operation Red Spider' purportedly shows a number of senior executives of the three banks verbally agreeing to take huge amounts of cash from the undercover reporter and putting them into a variety of long-term investment plans so that the black money ultimately is converted into white.

However, neither any account was opened nor any cash was deposited in these banks.

HDFC Bank further said internal departmental enquiry is underway to verify the truth or untruth or correctness, as the case may be, in the reported tapings of bank officials.

"The bank is committed to the highest standards of compliance, corporate governance and ethics, and has in place systems and procedures to ensure that its business is conducted in compliance with laws and regulations," it said.

The statement further said internal departmental enquiry is underway to verify the truth or untruth or correctness, as the case may be, in the reported tapings of bank officials.

Axis Bank also said the findings of enquiry are expected shortly and a senior-level committee has been constituted to monitor and supervise the entire investigation process on a daily basis. Both the Reserve Bank and the Finance Ministry have sought more details on the issue.

"Both RBI and Ministry have got into the act. So, we are collecting the information, the channels have been contacted. Once we establish what is the truth of the matter, we will decide on the further course of action. But prima facie this is a serious matter," Financial Services Secretary Rajiv Takru said on Friday.

Even Finance Minister P Chidambaram has spoken to the chairman of these three banks on the allegation of money laundering.