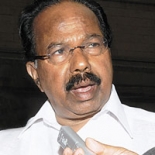 Newly-appointed Power Minister Veerappa Moily Wednesday refrained from blaming states for over-drawing electricity that may have led to the collapse of the three grids yesterday and said he will focus on combating the many troubles that are facing the sector.

Moily, who took charge of the Ministry this morning, said that he would take stock of the situation and start working on clearing the hurdles facing the sector.

"First thing is to stabilise the grid and it has to sustain. For that we will work out a proper strategy," he told reporters here.

Refraining from blaming the states for over-drawing the electricity from grids and not adhering to a discipline, Moily said he did not want to start his innings with a blame-game.

"I don't want to start with the blame game...at the appropriate time, we will find out short term and medium term solutions," he said.

Taking over the reins of the Ministry at a time when it is steeped in crisis, Moily will have to address the issues ranging from the failure of the three grids that plunged 21 states into darkness, to fuel shortages and the financial health of the distribution companies.

"I always like challenges in life...these things (electricity transmission and fuel issues) are very sensitive rather hyper sensitive in the sector, problems will crop up at the same time how we combat these problems that becomes a challenge," Moily said.

"We are very much capable...capacity has been built...that is not the end of the journey we need to do more that is why we are here," he added.

The country suffered its worst power crisis yesterday, impacting more than half of the 1.2 billion population, as the three Grids - Northern, Eastern and North Eastern - collapsed.

More than 21 states went without electricity for several hours crippling normal life. From miners to passengers to daily commuters were left stranded for hours at a stretch due to the massive power failure.