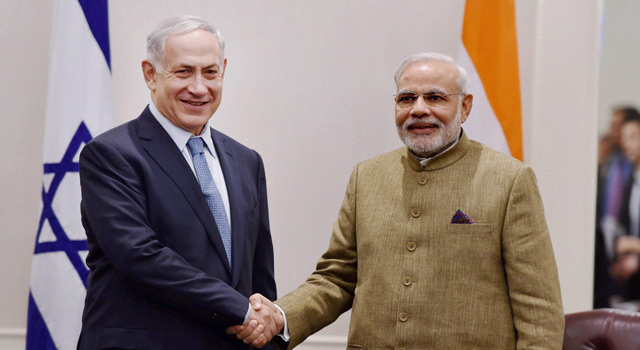 08 June, 2015
Print this article Font size -16+
Narendra Modi will be travelling to Israel, becoming the first Indian prime minister to visit the Jewish country with which bilateral defence links are growing.
No dates have been finalised for Modi's visit, which will take place at a mutually convenient time, External Affairs Minister Sushma Swaraj said.
Swaraj said she will be travelling to Israel this year, besides Palestine and Jordan.
India had established "full" diplomatic relationship with Israel in 1992 though it had recognised the country in 1950.
No Indian prime minister or president has ever visited Israel.
Ariel Sharon became the first Israeli premier to visit India in 2003. Sharon is credited with transforming bilateral relations from a low-level defence and trade cooperation to the strategic ties of today.
"As far as my visit is concerned, it will take place this year. I will visit, Israel, Palestine and Jordan. As far as Prime Minister's visit is concerned, he will travel to Israel. No dates have been finalised. It will take place as per mutually convenient dates," Swaraj said at a press conference.
At the same time, she asserted, "There was no change in India's policy towards Palestine."
India and Israel are working together in areas such as counter-terrorism, defence, agriculture and water and energy.
L.K. Advani had visited Israel when he was Home Minister in the Atal Bihari Vajpayee government. Jaswant Singh and S.M. Krishna had visited the Jewish nation as external affairs ministers. Recently Home Minister Rajnath Singh also visited Israel.
Describing Israel as a friendly country, Swaraj said India had never "let down" the Palestinian cause and it will continue to support it.
Daniel Carmon, Israel's ambassador in New Delhi, said Modi's visit will be "a natural ingredient of tightening relationship between Israel and India", according to a report in The Hindu newspaper.
Modi met Israeli Prime Minister Benjamin Netanyahu on the sidelines of the UN General Assembly meeting in September. Netanyahu said at that time the "sky's the limit" for Indo-Israeli relations.
Visiting Turkey
Asked whether the prime minister will visit Iran, she said no such visit has been finalised so far but he will be visiting Turkey to attend G-20 Summit later this year. Swaraj said she will travel to Iran to attend the NAM Summit this year.
Talking about the government's efforts to reach out to various countries, Swaraj said prime minister will visit five Central Asian countries including Turkmenistan, Kazakhstan and Tajikistan when he travels to Russia to attend the BRICS Summit.
"When he goes to Ufa in Russia for BRICS summit, he will visit five Central Asian countries," Swaraj said, adding "the foreign policy has been spread quite significantly. We achieved a lot."
Swaraj said Modi will also travel to Malaysia later this year for the annual ASEAN and east Asia Summit.
Balancing Act
Building close relations with Israel is a tricky issue for the Indian government as the country's large Muslim minority strongly opposes Israel's occupation of Palestine.
The Hindu daily reported in December that India was considering changing its automatic support for the Palestinians at the United Nations and could chose abstain on votes that involved Palestine and Israel.
India also has to balance its interests with Arab countries as most of them do not recognize Israel, which was created on Arab land in 1948.
Some Arab states like Egypt and Jordan have diplomatic relations with Israel, while the United Arab Emirates and Saudi Arabia maintain unofficial contacts without acknowledging them due to fears of public backlash.
Tags assigned to this article:
news 3 saudi arabia asean narendra modi uae turkey israel sushma swaraj palestine malaysia rajnath singh lk advani jordan benjamin netanyahu ariel sharon daniel carmon