Modi Rises To The Occasion 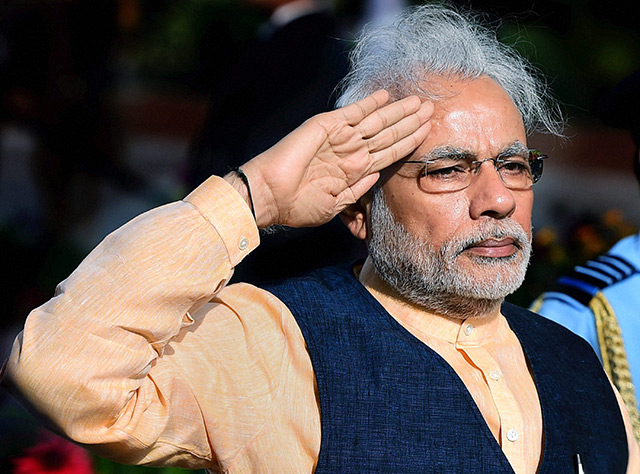 08 June, 2015
Print this article Font size -16+
Reform is not pleasant: no person can reform themselves without suffering and hard work, much less a nation.
Thomas Carlyle, Scottish philosopher
One year is perhaps too fleeting a timeframe to assess the success or failure of a government, much less one that governs one of the 10 largest economies in the world. But given the weight of expectations brought on by last year’s sweeping mandate, it is fair to say Prime Minister Narendra Modi has risen to the occasion on several counts. The last year has witnessed the initiation of some crucial paradigm shifts, besides several specific measures in various sectors, all aimed at re-energising a slumbering economy and putting it on the path to recovery and growth.
The Narendra Modi government has been trying to fight multiple battles across different fronts. The government has been successful in controlling the stubborn inflation, kick starting growth in the economy and efficiently managing the fiscal funds. The government is also constantly working towards diverse goals like improving India’s rank in terms of ease of doing business, creating a favourable environment for foreign investors, cleaning Ganga and improving sanitation.
Shift from consumption-led economy to infra/manufacturing-led economy: The government is targeting higher growth through infrastructure spending versus consumption driven growth of the past few years. The government has allocated 2.46 lakh crore for Roads, Railways & Power combined in FY16, a significant 63% Year on year jump. Our sense is that in roads & railways, total sector spend can be closer to 16 lakh cr over the next 5-7 years. Change in the government’s spending patterns from social sector & rural spend to infrastructure & energy further highlights its shift in focus to transform India from a consumption economy to an infrastructure driven one. This change will allow us to ape the Chinese model closely and set stage for a multi- decadal sustainable high growth rate which could push millions above the poverty line in India.

Focus on India’s rank and file into the mainstream:  While Urban India may expect Modi to behave like an economist or an entrepreneur, we must remember that he is basically a smart politician, hence sweeping high-visibility campaigns targeting the masses would remain the key.
Several initiatives have been aimed at bringing the marginalized into the mainstream. For example, the Jan Dhan Yojana, aimed at inclusive banking in India, has had different avatars since the nationalization of banks in the 60’s, but have all failed due to different reasons. Already , a record-breaking 15 crore bank accounts have been opened, and sustained campaigns to bolster this number, are signs of hope that perhaps a lot more can be achieved in the space of financial inclusion this time around. Similarly, emphasis on the Swachch Bharat Abhiyan, is aimed at improving sanitation in Rural & Urban India. Considering that the new government is concerned about the rank and file of India, we will continue to see initiatives in the mass base context.
Controlling corruption: The recent slew of measures by the government to control corporate access to government corridors will limit the corruption and misuse of government documents. The government has also successfully carried out fair and transparent e-auctions for the allocation of coal blocks as well as telecom spectrum which has bought in ~3 lakh cr to the exchequer.   Government has also started Direct Benefit transfer of LPG subsidies. Going forward, the Jan Dhan Yojana, Adhaar and Mobile (JAM) trinity will help reduce leakages to a great extent.
Foreign policy – A place in the Sun for India: Perhaps foreign policy is the area where the most visible strides have been made. Several firsts, such as US president Barack Obama attending the Republic Day Parade, PM Modi’s historic visit to Beijing earlier this month, his highly-publicized visit to the US, and the engagements with Japan and Australia are all steps in the right direction. $22 bn worth of deals have been signed with China, Japan has pledge $35 billion over the next 5 years to India and India has pledged a $1 bn line of credit to Mangolia.
In fact, India’s strengthening of friendship with Japan, Vietnam, South Korea, Australia, USA and Mongolia also acts as a move by India, to counter China’s strategy to box up India. Regional initiatives have also helped improve our relations with SAARC countries, such as India’s timely response to the Nepal earthquake crisis & Modi’s first visit to Sri Lanka in 28 years.
Visionary Planning & Strong Political Will
The political will of the NDA government appears to be extremely strong as demonstrated by the third promulgation of land acquisition bill. Measured approach in parliament & on ground has prevented any mass resentment against government’s structurally different initiatives. The government has done away with the 65 year old Planning commission and replaced it with the Niti Ayog that will include states into the economic policy-making in India and is a noteworthy step in improving center-state relations. The government is also striving to achieve 100 GW of solar Power & 60 GW of wind energy by 2022, which if achieved will set new global records. This goal of the government clearly highlights its long term vision and aspirational  spirit. In the words of Alvin Toffler, “You’ve got to think about big things while you’re doing small things, so that all the small things go in the right direction.”
Although the government has taken several steps to build a strong foundation for the Indian economy, a long road still lies ahead of us, and while the headline announcements have been heartening, the catch is, as in every aspect of our nation’s functioning, in their implementation. If Year 1 of the Modi government is aimed at getting the ball rolling, Year 2 will have to be all about growth.
Vinay Khattar, Associate Director & Head of Research – Edelweiss Financial Services
Tags assigned to this article:
economy othertop2 one year of modi vinay khattar