Modi May Announce Anniversary Gifts On May 26 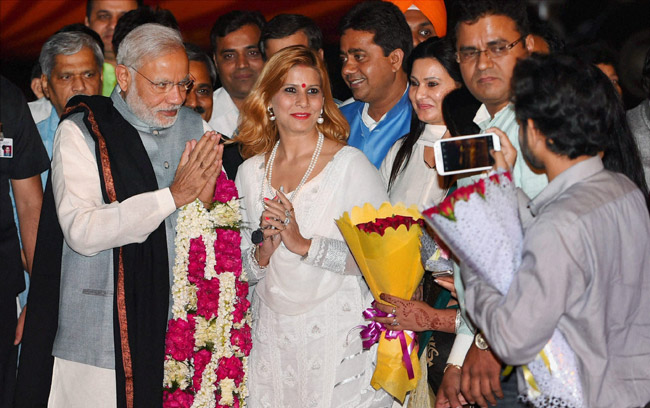 08 June, 2015
Print this article Font size -16+
Prime Minister Narendra Modi is likely to announce new flagship schemes on May 26 to mark the first anniversary of the National Democratic Alliance (NDA) government.
It is likely to be a social sector scheme aimed at reaching out to voters with the message that the NDA government is not just about being "business-friendly" but is pro-development", The Hindu newspaper reported, citing a source.

"As all things Modi does, it will be a big announcement," the source told the paper.
Modi on Wednesday met his senior ministerial colleagues to discuss programmes to celebrate first anniversary of his government.
At the meeting, the ministers are learnt to have told the Prime Minister that on the ground, the economy is still weak and the sentiment, though improving, is still not upbeat.
Bharatiya Janata Party president Amit Shah also met the Prime Minister in connection with the anniversary celebrations.
However, the Congress has accused the Modi government of "abdicating its responsibility" of providing basic amenities to the poor, citing purported cuts in budgetary allocations for social sector schemes by a whopping Rs 1,75,122 crore in a year.
Modi's "true" slogan was "corporate ka saath, khud ka vikas (support of corporates and development of self)", Congress spokesperson Jyotiraditya Scindia said, alluding to the Prime Minister's sab ka saath, sabka vikas (support of all, development for all) chant.
The Congress leader rejected the Centre’s argument that social-scheme outlays showed cuts because states had already been empowered financially through a new revenue-sharing model proposed by the Finance Commission.
The BJP is planning grand celebrations to mark its first year in office. Modi will flag off the celebrations on May 25 with a rally in Mathura, the hometown of Deen Dayal Upadhyay.