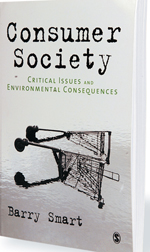 It is, after all, a matter of choice: whether you need a future or not. Explains an August 2005 report from Canada's International Institute for Sustainable Development: "The choices we make today cast huge shadows into the future, defining the ambition we can reasonably hold for prosperity and stability in the years to come." Today, the world reels under the destructive impact of climate change and the consumption choices of individuals, institutions and governments will determine the future and health of our planet. Barry Smart's latest book Consumer Society calls for a relook into our mundane consumption patterns that have become a routine part of our life, which "revolves around the wanting, longing and purchasing of things — a way of life in which identities of individuals are established and bound by what and how they consume".

Smart attempts to trigger thoughts and discussions around the contradictions of modern capitalism, tracing the development of the modern capitalist consumer culture, its definitive features, and the long-term global environmental consequences of consumption. The first few pages of the book set the scene, explaining the historical and conceptual issues relating to consumption. The meat lies in the concluding chapter, which says rightly that our consumption patterns need to give way to more sustainable, alternative choices.

The book has nine chapters and 40 sections that delve into issues ranging from the rhetoric and reality of consumer choice, to how consumers are cultivated in today's globalised, unsustainable, all–consuming world. Smart analyses giants such as Coca-Cola, McDonald's, KFC and The Body Shop to drive home his point.

The meticulously researched book explains the complex relationship between production and consumption. Production "stimulates consumption by generating needs, wishes, desires and fantasies" in respect of goods and services. It creates and influences consumers and brings in a "particularly distinctive modern way of life- consumerism — a way of life that is perpetually preoccupied with the pursuit, possession, rapid displacement and replacement of seemingly inexhaustible supply of things". And it is branding that helps establish this pursuit.

Smart is worried about the growth in global population. He says that while a chunk of the populace experiences a range of choices in an increasingly "throwaway" consumer society, an equally significant number bears the costs of over-consumption.

Today's way of life squanders away scarce natural resources, produces huge amounts of waste and, most significantly, abets global warming and climate change. "The earth's regenerative capacity can no longer keep up with demand — people are turning resources into waste faster than nature can turn waste back into resources," Smart notes. The present consumption pattern, which paves way for climate change, creates a chasm between the rich and the poor. That impedes meaningful human development and leaves the poor to cope with impact such as increased vulnerabilities in case of natural disasters, crop loss and food insecurity.

The book rightly argues that, while in certain circumstances the green consumer may adopt more sustainable products as a consumer choice, the larger change in the market will depend upon the "choice editing" brought about by the decisions and policies of governments, retail businesses and manufacturers of influential brands. The book concludes on a positive note, saying there is definitely a way out of the mess we have created, which should emerge from sustainable ways, by beginning to live within the limits of the ecology.

The book offers a good reading to anyone who wants to know about the history, evolution of consumerism as well as its consequences on the society, economy and environment.

Author's Details:
Barry Smart teaches sociology at the School of Social, Historical and Literary Studies at the University of Portsmouth. He has worked at universities in Australia, England, Japan and New Zealand. His books include: The Sport Star: Modern Sport And The Cultural Economy Of Sporting Celebrity (2005), Economy, Culture And Society (2003), and Resisting McDonaldization (1999).

Pillai is a political advisor of climate and energy campaign at Greenpeace India
The views expressed here are personal.