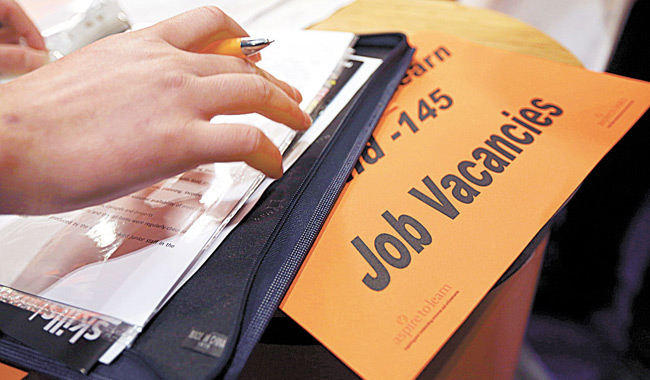 10 June, 2015
Print this article Font size -16+
The US trade deficit narrowed in April on a drop in imports, which surged in March following the end of a West Coast ports labour dispute, while companies picked up their hiring in May after a pullback the previous month. The data supported the notion that the US economy has recovered somewhat from a first-quarter contraction and has bolstered expectations that the Federal Reserve may consider raising interest rates later this year. Two private reports signalled slower growth in the US services sector, which has propped up the economy, as it faced drags from a strong dollar, a recent rise in oil costs and sluggish demand abroad.

MEGA DEAL
US cable company Charter Communications said it’s buying Time Warner Cable, with a far more generous offer than the botched attempt by Comcast that unravelled in April. The deal worth $55 billion is far more than the $45-billion offered by Comcast back in February 2014. The previous offer fell through in May after Comcast failed to get the regulatory approval. The new deal values Time Warner at $78.7 billion, including debts. Bright House Networks, another cable company, will also be rolled into the deal. According to the announcement, “The combination of Charter, Time Warner Cable and Bright House will create a leading broadband service and technology company serving 23.9 million customers in 41 states.”

IN REBOOT MODE
Microsoft Corp is preparing Windows 10 for release on 29 July, in time for the back-to-school personal-computer season, as the company tries to boost an ailing PC market and revive its own fortunes in mobile devices. The operating system will be available for PCs and tablets as a free upgrade to people using Windows 7 and Windows 8.1, or on Windows 10 devices, Microsoft said. Windows 10 for other devices will be available later this year. Microsoft said in April, that it expects a billion people to be using its Windows 10 operating system in the software’s first two to three years on the market, signalling optimism in its push to revive Windows and make it more useful on smaller devices. Still, market research firm IDC is predicting that PC shipments will drop 6.2 per cent this year as a corporate PC purchasing cycle runs out of steam. Windows 10 has a design that blends some aspects of Windows 8 with the older Windows 7’s appearance.

FAIR ENOUGH
Google said that 21 per cent of tech hires in 2104 were women, thus boosting the overall number of women in technical roles by 1 per cent, as part of efforts to increase diversity. The company recently disclosed the makeup of its workforce after admitting that it was “wrong, and that it’s time to be candid about the issues”. The technology industry has long been plagued not just by allegations of a gender gap, but also by a broad lack of inclusiveness that affects minorities too. Google said the increase in Black and Hispanic employees outpaced its overall hiring growth, but made up for only 2 per cent and 3 per cent of the total workforce, respectively. “Though we still have a long way to go, we’re seeing some early progress,” the company said.

SPY GAMES
Belgium and the Netherlands have launched probes into whether the BND, Germany’s intelligence agency accused of helping the US National Security Agency carry out joint surveillance of Berlin’s closest allies in Europe, had targeted its neighbours. The investigations follow reports that Germany’s foreign intelligence agency, operating in tandem with NSA, had an array of big shot targets in Europe, the French government, European Commission and Airbus Group, among a long list.

HARD BARGAIN
Greek Prime Minister Alexis Tsipras is deciding the next move in the country’s standoff with creditors after saying he has the only viable plan for a resolution. After meeting with European Commission president Jean-Claude Juncker, Tsipras stuck to his position that any basis for an accord must be a Greek proposal. The plan includes extra tax for companies and higher earners. Tsipras and his country’s international creditors were able to agree on some aspects of a financing deal at the recent meeting, but differences remain on some key issues, European officials said. Tsipras will submit a counter offer to his country’s creditors, including the rest of the euro zone and the International Monetary Fund, two officials said.

BAG OF WOES
Takata Corp said it will continue producing airbags that use ammonium nitrate propellant, but will change the design of the driver-side airbag inflators. The supplier is at the centre of a global recall of 10 million cars for deadly airbag inflators that could deploy with too much force and spray metal fragments inside vehicles. Takata executive Kevin Kennedy said other firms producing replacements for potentially defective Takata inflators will not use ammonium nitrate.

DEJA VU
Japan’s pension system has been hacked and more than a million cases of personal data leaked, authorities said, in an embarrassment that revived memories of a scandal that helped topple Prime Minister Shinzo Abe in his first term in office. Japan Pension Service staff computers were improperly accessed by an external email virus, leading to the leak of some 1.25 million cases of personal data, the system’s president Toichiro Mizushima said. He apologised for the leak, which he said involved combinations of names, identification numbers, birth dates and addresses. The pension service was setting up a team to investigate the cause and prevent a recurrence, he said.

CLIPPING WINGS
The newly-appointed chief executive of loss-making Malaysia Airlines Christoph Mueller said the carrier is “technically bankrupt”, underlining the case for a restructuring to cut a third of jobs, scrap some international routes and review its long-haul fleet. “We are technically bankrupt... the decline of performance started long before the tragic events of 2014,” he said. Already squeezed into years of losses by stiff regional competition, the carrier was seriously affected last year by two separate jet disasters. Mueller was making his first public appearance as CEO since being hired last month by the carrier’s owner, Malaysian state fund Khazanah, to lead the restructuring. The carrier confirmed that previously disclosed plans to cut 6,000 jobs and shrinking its workforce to 14,000 are now being implemented.

GROWTH PANGS
Growth in China’s giant factory sector edged up to a six-month high in May but export demand shrank again, prompting firms to shed jobs and keeping alive worries about a protracted economic slowdown, a government survey showed. In a sign that China’s worst downturn in six years is hurting its services firms, too, it showed growth in the sector slipped to a low not seen in more than five years. Services have been one of the lone bright spots in the Chinese economy in the past year. The reports reinforced the view that authorities would have to roll out more stimulus in coming months, despite cutting interest rates three times in six months.