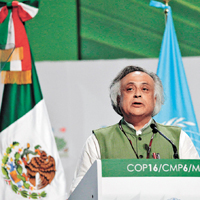 08 November, 2014
Print this article Font size -16+
India's seeming openness at the Cancun climate talks to legally binding form (in the future) has perplexed everyone. Historically India has always upheld the principles that underwrite the United Nations Framework Convention on Climate Change (UNFCCC) — that is, common but differentiated responsibilities, or mitigations, for developing countries and binding cuts for developed countries.

So when environment minister Jairam Ramesh called for "all countries to make binding commitments in appropriate legal form", it was seen by many as a dilution and a betrayal. The minister has since clarified that he was not committing, and that the intent was only to keep the doors open. Multilateral international fora may not be the best place to announce your new position without prior debate in the country.

Ramesh had left for Mexico with a directive from his Prime Minster to ensure India was a deal maker and part of the solution. His flexible negotiations earned him praise from the president of the Conference of Parties Patricia Espinosa, German Chancellor Angela Merkel, the Alliance of Small Island States and even the US chief negotiator Todd Stern. Stern's reading of the compromise offered by Ramesh was: "It did most of what the US thought needed to be done and had the benefit of not being ours. Diplomatically, that can be a good thing."

At Cancun, everyone, except for Bolivia, agreed that developing countries will take "nationally appropriate actions" to curb their emissions by 2020. For Ramesh, a personal victory will be the inclusion of his proposal to expand the International Consultation and Analysis (ICA) to non-Annex 1 parties, minus punitive measures. Guidelines have to be worked out.

But back at home, critics, including former climate change negotiators, worry that our new "activism" has only led to a fracturing of the strong coalition of BASIC (Brazil, South Africa, India and China) countries. China uses its position as economic power on other issues, but has always stuck to the "developing" status when it came to climate change. That is no longer working with the rest of the world. They would like to see China and India, as significant emitters, sign up for emission cuts.

This is what is worrying about India's new "pragmatism", irrespective of what geopolitical aspirations are driving them. Many think it is only a matter of time before India is pressured to move from legally binding mitigations to deductions — particularly if it chooses to join the club of developed countries.

It doesn't take the WikiLeaks exposure of the US financial baiting for support at Copenhagen to understand what the negotiations really are — a fierce battle to safeguard national economic interests. Moving the world towards a low-carbon model and greener technology will require billions of dollars. When the Parliament is back at work in February, the government will not only have to explain its new position, but also clarify just how much development space we are compromising on in the bargain.

As expected, there was no agreement on global emission cut targets for 2050 at Cancun — such as UN's goal of holding temperature rises at 2°C above pre-industrial levels. However, the agreements have set the agenda for the 2011 summit at Durban, and have saved the credibility of UNFCCC as the conductor of climate talks. After Copenhagen, where developing countries in a coup of sorts found a backdoor accord for a limited set of countries, there were concerns that the negotiations may break up and be carried forward under smaller groups such as the G20.
(This story was published in Businessworld Issue Dated 27-12-2010)
Tags assigned to this article:
magazine on point jairam ramesh meera mohanty environment un moef cancun climate basic countries