Mission impossible to have player like him: Virender Sehwag on Dhoni's retirement from international cricket

Mission impossible to have player like him: Virender Sehwag on Dhoni's retirement from international cricket

New Delhi [India], Aug 15 (ANI): Former India batsman Virender Sehwag on Saturday said it is impossible to have a player like MS Dhoni as he is one of a kind.
Sehwag's response comes after the former skipper announced retirement from international cricket.
Taking to Instagram, the wicketkeeper-batsman shared a video and captioned the post, "Thanks a lot for ur love and support throughout. from 1929 hrs consider me as Retired."
The video had the iconic song 'Mai Pal Do Pal Ka Shayar Hu' from Amitabh Bachchan's 'Kabhie Kabhie' playing in the background, Dhoni shared his incredible journey in the Indian side including his run out in the last game against New Zealand in the World Cup 2019 semifinal.
"To have a player like him, Mission Impossible. Na Koi Hai, Na Koi Tha, Na Koi Hoga MS ke jaisa. Players will come and go but there won't be a calmer man like him. Dhoni with his connect with people having aspirations was like a family member to many cricket lovers. Om Finishaya Namah," Sehwag wrote.
"Not an azaadi cricket lovers wanted from. Thank you for the innumerable memories together and wish you a great and equally inspiring life ahead," he added. 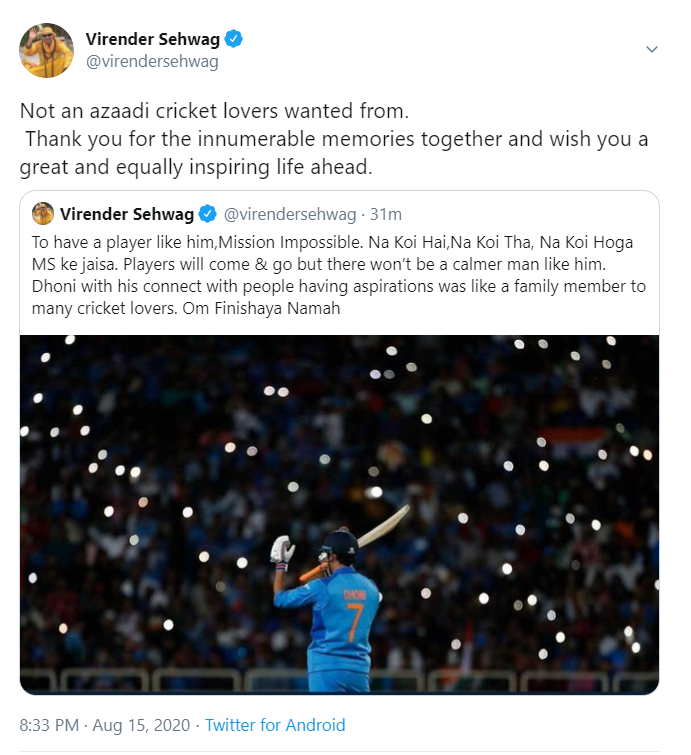 Sehwag had played under the leadership of Dhoni for a decent amount of time and was also part of the 2011 World Cup-winning side.
Commenting on Dhoni's retirement, former India legendary batsman Sachin Tendulkar said the former skipper had contributed immensely to the Indian cricket.
"Your contribution to Indian cricket has been immense, @msdhoni. Winning the 2011 World Cup together has been the best moment of my life. Wishing you and your family all the very best for your 2nd innings," Tendulkar tweeted. 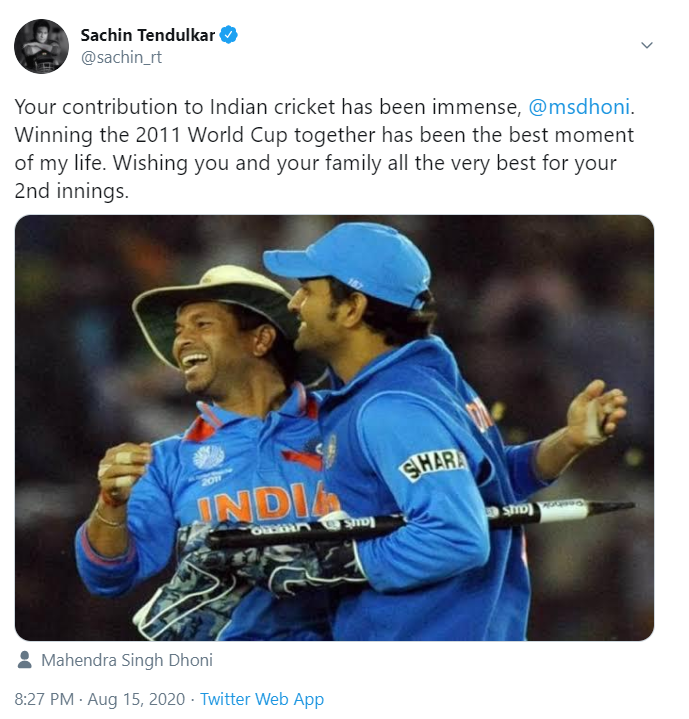 Dhoni had played 350 ODIs and scored 10,773 runs with the highest score of 183* against Sri Lanka. He also remains the only captain to win all major ICC trophies (50-over World Cup, T20 World Cup, and Champions Trophy).
In 98 T20Is, he amassed 1,617 runs at an average of 37.60. In the longest format of the game, Dhoni played 99 matches and accumulated 4,876 runs with an average of 38.09.
In December 2014, he announced his retirement from Test cricket. Then in 2017, he handed over the captaincy to Virat Kohli in the 50-over format. However, the wicket-keeper enjoys a great camaraderie with the latter and the duo have been seen often taking decisions together on the field.
Under Dhoni's leadership, India also managed to attain the number one ranking in Test cricket. His Indian Premier League (IPL) franchise Chennai Super Kings (CSK) has also won the tournament thrice under his leadership.
Dhoni was slated to return to the cricket field on March 29 during the IPL's opening match between CSK and Mumbai Indians. However, the tournament will now be played in the UAE from September 19 to November 10. He will continue as CSK's captain in the IPL 2020. (ANI)