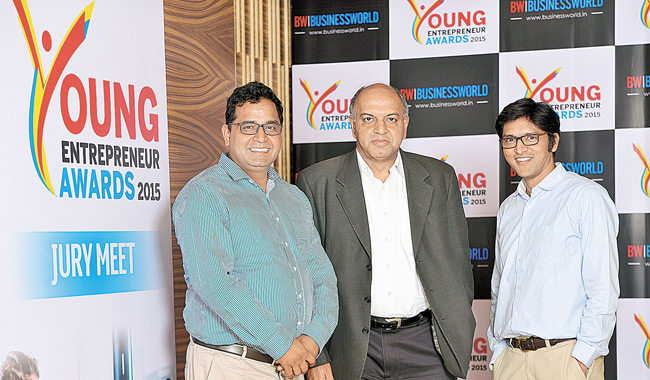 09 June, 2015
Print this article Font size -16+
The scores of great ideas and projects, the startups that are battling it out to make it commercially, were difficult to judge. The only way to do it was to get the men with the same passion that fires the competing young entrepreneurs. Those who made up the jury were well cut out to judge as they have walked the startup coals; they have dared the challenges of risk-taking to build successful businesses. It couldn’t have been a better jury. They helped sift and sort through stacks of forms, patiently heard out dozens of great presentations and argued long and hard before reaching difficult decisions.

Please meet the members of the jury we at BW|Businessworld are proud of:
Vijay Shekhar Sharma (above left): Founder and CEO of One97 Communication/Paytm, one of India’s largest growing mobile Internet and mobile commerce companies. He also invests in early-stage mobile Internet startups from his company’s One97 Mobility Fund. An avid admirer of great design, Sharma believes his ultimate moment is yet to arrive. If he wasn’t in his current role, he would have been singing along with Bono, Vijay says with a straight face.

Sanjeev Bikhchandani (centre): Founder of Naukri.com, India’s leading job site. His company also runs Jeevansathi.com, 99acres.com, and Shiksha.com. In addition, he has made strategic investments in promising web startups such as Policybazaar.com, Meritnation.com, Zomato.com, Mydala.com, Canvera, and Happily Unmarried. He has served as president of the Delhi chapter of TiE (The Indus Entrepreneurs). He also serves on the national executive of FICCI and on the national council of AIMA.

Rahul Chandra (right): Co-founder and managing director of Helion, Chandra has 17 years of venture capital investing and corporate development experience in technology product and services companies in India and the US. He serves on the boards of Seclore, Shubham, UnitedLex, Netambit and Mindworks and manages investments in Cucumber Town, EzeTap, Spandana and Equitas. He has invested in more than 30 early-to-mid-stage companies such as Mindtree, Ikanos (IKAN), e4e Inc and Techspan (Headstrong). Chandra, a graduate of BITS Pilani, has an MBA degree from University of California, Berkeley.

Methodology
BW | Businessworld, in what is an annual exercise, started an online campaign to identify the young and the brightest in new entrepreneurship. Companies were invited to file nominations in two categories — 1) Those that were between 3 and 5 years old; and 2) Those less than 3 years old. Another requirement mandated that at least one founder of such a company had to be less than 35 years old.

We received 124 nominations in all for both the categories. In cases where there was a long gap between the company’s registration and commercial launch, we opted to go with the time the company became operational. After going through the applications in detail, companies that didn’t meet the selection criteria, or had not provided critical information, were eliminated. After that, a team of senior editors shortlisted companies based on their innovative business models, sustainability and scalability of business and overall financials. A total of 36 companies were shortlisted — 22 companies were less than three years old and 14 between 3 and 5 years old. We invited three jury members who are successful entrepreneurs and also angel investors — Sanjeev Bikhchandani, founder and executive vice-chairman of Info Edge (India); Rahul Chandra, co-founder and managing director of Helion Venture Partners; Vijay Shekhar Sharma, founder & chief executive officer, One97 Communications.

This august jury thereafter evaluated the data provided by the companies and also gave time to the shortlisted promoters to make presentations about their products and business models. Around 22 companies made a pitch. After hours of discussions and sifting through data, the jury members chose five winners from each of the two categories.