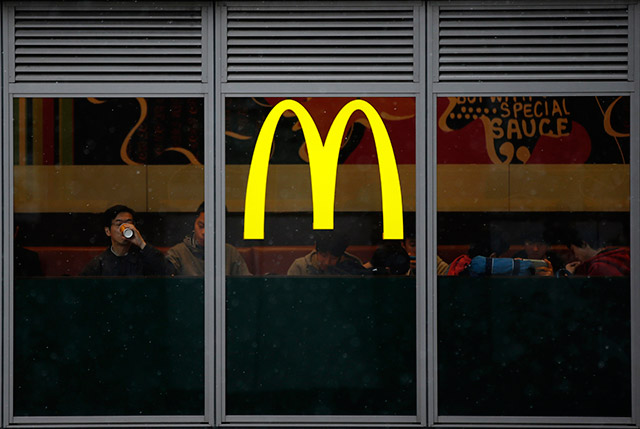 06 April, 2015
Print this article Font size -16+
McDonald's Corp's announcement that it will raise the average pay at its company-operated U.S. restaurants threatens to complicate an ongoing labour dispute that turns on whether McDonald's can be held responsible for the labour violations of its franchisees.
The decision to hike wages to around $10 an hour will affect only 90,000 of the roughly 750,000 McDonald's restaurant workers in the United States, because almost 90 percent of McDonald's restaurants are run by franchisees.
The International Franchise Association said on Thursday the move to raise wages was a "reminder" that McDonald's and its roughly 12,500 franchised restaurants are not "joint employers."
The question of whether they are is at the centre of closely watched cases before the U.S. National Labor Relations Board (NLRB) in which McDonald's has been accused by the agency's attorneys of intimidating workers who participated in union organising and in a national protest movement calling for higher wages.
Steve Caldeira, president of the International Franchise Association, a trade group that represents franchisors including McDonald's and KFC parent Yum Brands Inc, said the wage plan demonstrates independent decision-making by franchisees separate from McDonald's.
"If the franchisees want to also raise the wages of their employees, they have every right as independent business owners to make decisions that allow them to hire and retain the best employees in the local markets where they operate," Caldeira said in a statement on Thursday.
But some worker advocates downplayed the significance of the wage decision to the NLRB proceedings.
The wage decision is not enough to show that franchisees are independent, said Catherine Ruckelshaus, general counsel of the National Employment Law Project, a nonprofit in New York that advocates for workers and has criticized McDonald's. She said the questions before the NLRB are different than simply wage levels.
"McDonald's is pretty unique in terms of its control over its franchisees. It micromanages, controlling things like when workers clock out and clock in, thanks to their technology," Ruckelshaus said. The technology includes a computer system that tracks the number of burgers sold and calculates whether a franchisee should take a worker off the clock to keep labour costs in check.
Karen King, the chief people officer at McDonald's, said it would not be appropriate for the company to make a recommendation on wages to franchisees.
"Some may follow. Some may not. We can't dictate what they do in the wage arena," King told Reuters in an interview. King said the NLRB cases did not figure into the McDonald's wage move.
A NLRB administrative law judge is presiding over the NLRB cases, and a consolidated trial is scheduled to begin in May. The NLRB attorneys have argued that Illinois-based McDonald's and the franchisees should be held jointly responsible because corporate policies and franchise agreements have a major impact on working conditions. McDonald's has denied the allegations.
Any decision by the judge, Lauren Esposito, is expected to be appealed to the five-member board and, ultimately, to federal courts. The outcome of the proceedings could have wide-ranging implications for franchise businesses and other types of employers.
The decision to raise wages probably does put some pressure on franchisees to do the same, said Sara Senatore, restaurant analyst for Bernstein Research, a Wall Street research firm. She said that fast-food chains such as McDonald's compete for workers with each other and with retailers such as Wal-Mart Stores Inc, which this month raised worker wages.
"Market forces in this case are going to be pretty powerful. Franchisees are small-business people. Ultimately, they're going to do what's dictated by the competitive environment," Senatore said.
(Reuters)
Tags assigned to this article:
news 7 restaurants employment mcdonald food and beverage international franchise association