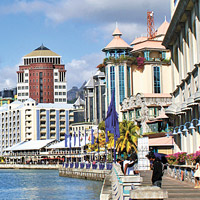 08 November, 2014
Print this article Font size -16+
Hopeful of reaching an agreement soon on the long-pending revision of tax treaty with India, Mauritius says it has gone 'extra mile' to ensure that the pact does not get misused for illicit activities like money laundering and round-tripping of funds.

Mauritius is willing to take even further steps to resolve any pending issues and reach a "win-win situation" for both the countries, as the treaty has been mutually beneficial in the past three decades, the country's Vice Prime Minister and Minister of Finance and Economic Development Xavier Luc Duval told PTI in an interview.

"I am hopeful. I would hope that we could come to an agreement to ensure certainty and predictability," Duval said in reply to a question on whether he expects to reach an agreement with India on revision of the DTAA (Double Taxation Avoidance Agreement) between the two countries.

"The existing DTAA was signed almost 30 years ago and it has been beneficial to both India and Mauritius and we would like to see this continue given the mutual benefits available from this treaty," he said.

The two countries had signed this DTAA in 1982 when late Indira Gandhi was India's Prime Minister and the treaty was part of various steps initiated by the two countries for strengthening the flow of investments to and from Mauritius.

While the treaty has helped in driving a significant flow of foreign investments coming to India through Mauritius over the years, there have also been concerns in the recent years about a suspected misuse of this pact for round-tripping of funds and laundering of illicit money by Indian entities through this Indian Ocean island nation.

Consequently, India sought to revise the treaty a few years ago, but the matter has been dragging for one or other reason, although a joint working group has been working on revision of the pact for quite some time.

When asked why the revision of the treaty was taking so much time and what are the contentious issues, Duval said: "It will be difficult to comment on specific matters being dealt with in our negotiations. But I understand from the officials engaged in the discussions that there is a greater understanding of the issues on each side and that progress is being made."

"We are hopeful that we can come to an agreement in the near future," he said, while adding that Mauritius in the meantime has introduced a number of measures to address the issues such as round tripping.

"The fact remains that we have gone the extra mile. There are special India conditions in our guidelines for issuance of TRCs (Tax Residency Certificates) which does not allow a company to invest in India if the funds are found to be of Indian origin, TRCs are issued on annual basis.

"To plug any loopholes, we have allowed auditors from India to audit the books of these companies, and there are a number of other similar safeguards," he said.

"Obviously as we progress as a jurisdiction, we are continually enlarging the type of services offered as well as the number of service providers that are here. We are introducing in our legislation enhanced commercial substance requirements for the global business companies operating from Mauritius," the minister said.

TRCs are necessary to get tax benefits for companies registered in Mauritius, while the entities investing in India and other countries from here need to operate as a Global Business Company under Mauritian regulations.

The minister said that both the countries have already agreed on a new TIEA (Tax Information Exchange Agreement) and it is now waiting to be signed.

"As far as the DTAA is concerned, it has resulted into huge amount of foreign investment in India and the creation of hundreds of thousands of jobs. On the other hand, the DTAA has also created lots of work here in Mauritius for our professionals.

"There are different ways to look at it, as one person may say that India have lost some tax revenues whilst another could say that perhaps these investments would not have been channelled to India without the treaty," he said.

When asked whether Mauritius would be open to making concessions for the mutual benefits of the two countries, Duval said: "We will be happy to find a win win solution and we have already gone quite a long way to resolve the issues.

But obviously, we would not do anything that would destroy the treaty, as there would not be any point in having any treaty in that case.

"At the same time, we want to continue our deep friendship with India," he said.

Top officials in the Finance Ministry here said Mauritius has taken a number of measures to address India's concerns about possible misuse of the treaty.

These include introduction of a Mutual Assistance in Criminal and Related Matters Act, which provides for requests for judicial assistance, they said. Besides, the country's financial market regulator FSC (Financial Services Commission) has signed an MoU with the Securities and Exchange Board of India (Sebi) to provide for exchange of Information.

Mauritius has also agreed to the stationing of an officer from India's Revenue Department for better exchange of information and issuance of TRCs on an annual basis.

"Mauritius has done everything to curb round tripping. We changed the law to respond to concerns of India. The TRC that are issued are subject to auditors certifying that there is no evidence of round tripping," a senior Ministry official said.

He added that there have been effective exchange of information on 170 cases over three years between the competent authorities of two countries and some of them were even outside the framework of DTAA.

"In line with international standards, stringent licencing conditions have already been introduced to ensure that Indian-sourced funds are not re-invested in India through Mauritius, while we have also agreed with India to extend our assistance in the collection of taxes here," he further said.