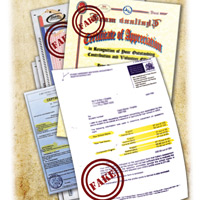 How many can honestly say that they have never lied in their resumé? Very few, says Ajay Trehan, CEO and managing director of Authbridge, a Gurgaon-based background screening company. But some job applicants are more innovative than others, forcing private security companies such as Authbridge and Mumbai-based First Advantage and KPMG Forensic Services to roll up their sleeves. Here are stories of six people who tried their tricks, but got caught.

Who's Who
Shalini worked for a large software company in the National Capital Region. One day, she fell ill and spent a month on leave. When she re-joined, her boss felt something was wrong. Her demeanour had changed, her work was not as consistent as it used to be, and she seemed to suffer from frequent memory lapses.

Meanwhile, the company decided to hire a security company to conduct a background check on its employees. When a verification agent contacted Shalini's previous employers, they were told she had died. Puzzled, the agent contacted authorities and found that Shalini had indeed died two weeks ago of pneumonia. So, who was the woman working in the office?

It was Malini, Shalini's twin, who had assu- med her sister's entire identity as well as her job.

In The Boss' Shoes
Kumar was fired from a Delhi-based company because his boss, Dilip, felt his performance was not up to the mark. Before leaving, Kumar stole several of his boss' personal documents including certificates from prestigious universities, and used these to apply for a job using a new identity: that of his former boss. Impressed, a company made him a lucrative offer. But what Kumar did not know was that the company worked with a background screening firm. When the verifier contacted the candidate's previous company, he was surprised to find that ‘Dilip' was still a partner there. Kumar's former employers even gave the verifier a photograph of the real Dilip. The to-be employers immediately withdrew their offer to Kumar.

Rewriting History
Ramesh Ahuja applied for a job with a large Delhi-based company. He provided school certificates as well as salary slips, appointment, resignation and relieving letters from his previous company. The prospective employers were on a major recruitment drive but had hired a security company to do background checks.

As is routine, verification agents contacted Ahuja's work references. All of them had only good things to say about him — he was hard working and reliable, and they were sorry to lose him. But when it came to the nature of Ahuja's work and the activities of the company, they were vague. After some research, the agents found that the company Ahuja claimed to have worked for had shut down many years back. A couple of former employees had stolen sheets with the company's letterhead and started a new business: issuing fake letters and certificates. Naturally, Ahuja's application was rejected.

You Scratch My Back
Brijesh Vadhwani worked as a senior manager with one of the country's top telecom companies. At the time of joining, he had given all the required documents such as school certificates, details of past employment and address proof.

The company hired a security firm to verify the information. A field executive went to Vadhwani's address but neighbours told him that no one by that name lived in the lane. When the executive reached the particular house, a young man, who turned out to be Vadhwani's friend, opened the door. When the situation was explained to him, the friend asked whether an education check would be conducted as well. After a pause, the friend offered the executive money to clear the address and education checks. Vadhwani was fired.

Office Property
Authbridge was hired by a large company in Delhi to screen several prospective employees. It had to check the candidates' education and employment backgrounds as well as verify their addresses. While going through one applicant's past employment documents, they noticed that while the relieving letter was on a company letterhead and duly signed, the firm's telephone number was not mentioned anywhere. A field verifier was sent to the address, but all he found was an empty building.

A few days later, a relieving letter submitted by another candidate came from the same company and signatory, but the address mentioned was different.  Again, a field verifier was sent to the second address, but he had no success.

A third letter from the same company was submitted by another candidate. This time the letter carried a cellphone number. The signatory of the letter was contacted and was asked for the company's landline number.

Finally, when the company's owner was contacted, he confirmed that the signatory of the letters was indeed a manager in the company, but none of the applicants mentioned in the letters had ever worked there.

Double Trouble
Akash and Gagan were identical twins just about to complete their post-graduation. While Akash obtained top grades, Gagan barely passed. Gagan, who always wanted to work for a big MNC, applied for a job but was rejected. Bitterly disappointed, he decided to steal his brother's marksheets. He again applied for a job with a big MNC in Gurgaon, and was offered a job this time, that is, until a verifier contacted his twin brother.
(Names have been changed)