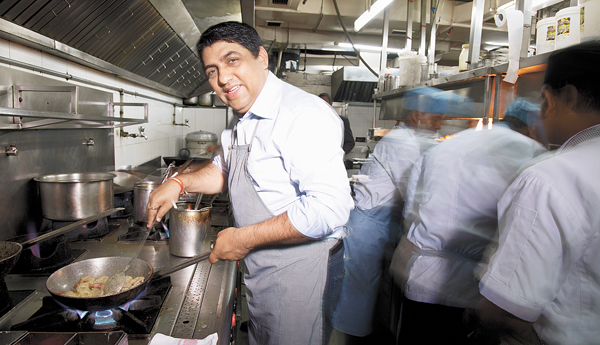 
Innovation, whether in tweaking the recipe or changing the name of a dish, seems to work for Chatterjee. One of the hot-selling items at Sigree is the Kosha Gosht, which is basically mutton fried in its own juices without water. Kosha Mangsho is the same dish with a Bengali name served at Oh! Calcutta and is equally popular. "If we had called it Kosha Mangsho at Sigree, it wouldn't have fitted in and we didn't want to call it Bhuna Gosht because that's too common."

Chatterjee's endeavour to please the tastebuds of a larger section of society has also made him do the unthinkable — serving boneless ilish or hilsa at Oh! Calcutta. Bengalis not only frown at the thought of hilsa without bones, they consider it an insult to the most-sought-after fish.  However, most non-Bengalis find it difficult to eat hilsa because of the numerous bones. "There's one chef at a restaurant in Calcutta's Park Street who has perfected the art of cutting the hilsa in such a way that the bones are removed. He has trained our chefs," says Chatterjee. The boneless hilsa is a favourite at most Oh! Calcutta outlets.

It's not just food but the whole experience which, feels Chatterjee, makes his restaurants stand out. "We are a 5-star restaurant chain without the 5-star price tag." But really it's his eye for detail. For instance, the front office staff at all his restaurants are trained to handle babies. If you have left your reading glasses at home, don't worry, the restaurant manager can offer you a pair to help you read the menu. And shawls are available for those who find the air-conditioning too cold.

Manpower is one of the biggest challenges of the restaurant business. "In our business even if you need a glass of water, you need someone to get it for you," says Chatterjee. He runs his own catering school in Kolkata and 90 per cent of his staff is trained there. "Initially, my wife and I taught them all the Bengali recipes. Now there are others but I'm still hands-on. I call my chefs at 3 am if I want to discuss something."

So what is it that worries him the most? A dissatisfied customer, he says. "Satisfied customers are none of my business but a dissatisfied customer can kill my brand," says Chatterjee whose second love is advertising. Reading the comment cards tops his to-do list everyday. Leave a negative comment at any of his restaurants and you may get a call from one Mr Chatterjee. On the other hand, if you enjoy the food at Mainland China, don't forget to kiss the chef.