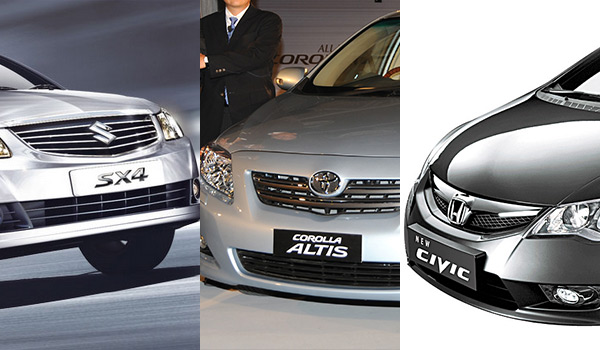 08 November, 2014
Print this article Font size -16+
In a relief to car manufacturers, the Revenue Department clarified on Wednesday that Maruti SX4 and Toyota Corolla Altis will attract lower excise duty of 27 per cent and not the higher levy prescribed for SUVs.

The clarification issued by the Central Board of Excise and Customs (CBEC) has laid to rest the confusion whether these cars would attract 30 per cent excise applicable to Sports Utility Vehicle (SUVs) or 27 per cent meant for large sedans.

"...it is clarified that the afore-cited motor vehicles (Maruti SX4, Honda Civic and Toyota Corolla Altis), which are known as sedans, will attract the excise duty of 27 per cent as applicable to large segment cars", CBEC said in a circular.

The clarification was sought by car makers as several large sedans have similar technical specifications as that of the SUVs.

Honda Cars India said meanwhile that since it had already stopped production of Civic in India, the changes proposed in the Budget had not impacted it.

While increasing the excise duty on SUVs to 30 per cent in the last Budget, the government has defined three features of the SUVs -- engine capacity of over 1500 cc, length more than 4,000 mm and ground clearance of 170 mm and above.

Finance Minister P Chidambaram in his Budget speech had said: "SUVs occupy greater road and parking space and ought to bear a higher tax. I propose to increase the excise duty on SUVs from 27 per cent to 30 per cent. However, the increase will not apply to SUVs registered as taxis."

The CBEC clarification will provide some relief to the car manufactures who are facing decline in sales on account of overall slowdown. The auto industry has been demanding reduction in duty on SUVs, which till recently was the fastest growing segment, to 27 per cent.