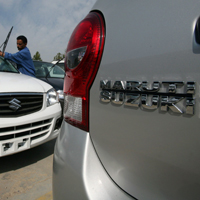 08 November, 2014
Print this article Font size -16+
Maruti Suzuki, India's biggest carmaker, lagged estimates with a 5 per cent fall in profit, its fifth consecutive quarterly decline, after a deadly riot at one of its plants led to a $250 million production loss.

Shares in Maruti, however, rose as much as 4.2 per cent after the earnings as the sales volume in the quarter was better than expectations and traders expect a pickup in demand in the months ahead.

Maruti was forced to close its Manesar factory for more than a month after labour unrest erupted into a mob riot that left one manager dead and scores injured.

CFO Ajay Seth said Maruti Suzuki will see its margins impacted by 15-30 basis points over the next two years as a result of the new wage settlement with its workers.

Maruti, controlled by Japan's Suzuki Motor Corp, said net profit fell to Rs 227 crore in the second quarter of the fiscal year that began in April, from Rs 240 crore a year earlier. Analysts expected a net profit of Rs 252 crore, according to Thomson Reuters I/B/E/S.

Net sales rose 8.5 per cent to Rs 8,070 crore, the company said in a statement, helped by improved sales of its newly launched Ertiga utility vehicle.

Maruti imports a large proportion of its car parts and pays royalties to its Japanese parent. The rupee at the end of September was 12 per cent weaker than 12 months previously.

The riot, which saw a mob of workers rampage through the factory offices armed with steel rods and car parts, came as Maruti battled a slump in Indian car demand, hampered by high interest rates, increased fuel prices and sluggish GDP growth.