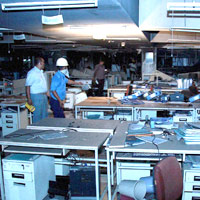 08 November, 2014
Print this article Font size -16+
The violence at Maruti Suzuki India's Manesar plant in July was not instigated from outside, but was due to internal issues between management and workers, according to the chargesheet filed by the Special Investigation Team (SIT) formed to probe the incident. Charges against 145 persons have been framed after interviewing 300 witnesses by the Haryana Police.
"The chargesheet was filed last week. It was found that the violence was not instigated from outside but was due to the union trying to show solidarity with workers," Deputy Commissioner of Police Maheshwar Dayal told PTI. "It was more of an internal issue between the management and the workers," he said, adding that involvement of Naxal elements into the violence was also ruled out. When contacted, Maruti Suzuki India spokesperson declined to comment.
Dayal further said: "Chargesheets have been filed against 145 persons and a total of 300 witnesses were interviewed to file the report, which runs into 3,000 pages." The main charges levelled include murder, attempt to murder and destruction of property.
The finding of the SIT is contrary to what the company had stated at the time of declaring lockout at the plant that the "orchestrated" violence appeared to be instigated from outside as "there were no pending issues with the workers".
MSI Chairman R.C. Bhargava had said the violence was a handiwork of "extreme Left wing elements" and "it was a conspiracy which was kept within a small group of people" and even described the incident as a "class attack".
The Haryana Government had formed an SIT under Assistant Commissioner of Police Ravinder Tomar with six inspectors to probe the incident. A total of over 140 workers, including leaders of Maruti Suzuki Workers Union, were arrested by the police.
On 18 July, violence broke out at the plant following an alleged scuffle between a worker and a supervisor. MSI General Manager(HR) Awanish Kumar Dev was killed in the incident and 100 others were injured. The company declared a lockout at the plant on 21 July and was lifted on 21 August. During the lockout the overall production loss was pegged at around Rs 1,400 crore.
Following the incident, MSI had also decided to terminate services of 500 permanent workers, who were allegedly found to be involved in violence inside the plant.
(PTI)
Tags assigned to this article:
corporate business auto maruti suzuki news 7 strike automobiles human resources maruti unrest maruti labour unrest rc bhargava awanish kumar dev special investigation team