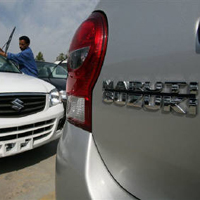 08 November, 2014
Print this article Font size -16+
The country's largest car maker Maruti Suzuki India on 3 October' 2012 said it has hiked prices of its all models by up to Rs 5,250 with immediate effect to offset adverse impact of foreign exchange fluctuation and rising input costs.
"The average hike in the price across models is around 1 per cent and the range will be between Rs 2,500 and Rs 5,250," a company spokesperson said.
The price increase will take place with immediate effect, he added.
The company sells a range of models starting with the small car M800 to the luxury sedan Kizashi, which are priced between Rs 2.04 lakh and Rs 17.5 lakh (ex-showroom Delhi).
Last month, Maruti Suzuki India Chief Operating Officer (Marketing and Sales) Mayank Pareek had said the company would hike prices of its vehicles due to various factors.
"There is a lot of pressure on our margins due to the foreign exchange fluctuation and rising input costs," he had said.
The company had said that in order to counter the impact of adverse currency movement, it is targeting to reduce its forex exposure by nearly 65 per cent to $600 million by March 2015 for which it is working with its vendors to reduce imports.
Besides, the company is looking out for new markets to increase exports of its products to mitigate impact of unfavourable foreign exchange fluctuation.
Other car makers including Honda Cars, General Motors and Audi India have either raised the prices of their vehicles or in the process to do so.

Honda Cars India raised the prices of its three models -- Brio, Jazz and City -- by up to 2.6 per cent with effect from October 1.

General Motors India had said it would increase the prices of all its models from October 1 to offset the impact of rising input costs and currency fluctuation.

Luxury car maker Audi had hiked the prices of its sports utility vehicle Q3 by up to two per cent, translating into an increase of Rs 50,000, from this month.

However, Tata Motors on October 2 cut the prices of its compact car Indica eV2 by Rs 23,000 with the launch of a refreshed version.