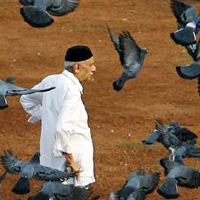 08 November, 2014
Print this article Font size -16+
The BSE Sensex rose to a 15-month high, while the Nifty hit 17-month highs, after the government's reform proposals for the insurance and pension sectors sparked gains in financial stocks such as State Bank of India and ICICI Bank.

The Cabinet is set to approve bills that would raise the cap on foreign direct investment in insurance firms and open the pension sector to foreign investors, a government minister told reporters on October 3.

The Bills, which require parliamentary approval before becoming law, will likely be taken up in the forthcoming parliamentary session.

Foreign groups are not allowed to invest in the pension sector, while investment is capped at 26 percent in the insurance sector.

Financial sector reforms including pension and insurance have been pending for years for want of a political consensus.

The BSE benchmark Sensex surpassed 19,000 level in early trade by rising over 200 points on sustained buying by participants as government is expected to announce further economic reforms.

Brokers said trading sentiment remained bullish on continued buying by funds and retail investors on expectations that the government will accelerate pace of economic reforms by raising FDI cap in insurance sector.

Earlier this year, Singh had to put on hold a similar bill after failing to win over allies and opposition parties.

Domestic and foreign insurers, which have invested billions of dollars in India over the past decade, have been lobbying for years to raise the foreign direct investment limit.

The minister, who declined to be named, said the bills would raise the cap on FDI in insurance firms to 49 percent and permit 26 percent foreign investment in the pension sector.

Faced with a slowing economy, Singh has been trying to push ahead with stalled reforms to boost growth.

Earlier this month, the government raised the price of heavily subsidised diesel and cut supplies of subsidised cooking gas despite strong political opposition, including from within the ruling coalition.

It also opened up the retail sector to global supermarket chains, allowed foreign airlines to buy stakes in local carriers and raised the bar on foreign investment in broadcasting.