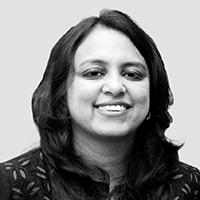 08 November, 2014
Print this article Font size -16+
I just got back from west Africa, a part of the world we are only dimly aware of. Thanks to Bournville chocolates, I connect Ghana with cocoa beans. But I could not place it on a map, before I actually made the trip. Yet, decades before I took an 11-hour flight to Accra, enterprising Indians had found their way here. Ghana was a British colony, friendly to trade and commerce. In the 1930s, merchants from Sindh came in search of opportunities, and some stayed on.
Meet 79-year-old Ram Mohinani. He came to Ghana in 1954 to work for his uncle’s firm. Later, he started his own business, manufacturing plastic film. Today, Poly Products is a multinational with 3,000 employees and a turnover of over $250 million. Mohinani’s three sons oversee operations in three different countries — Ghana, Nigeria and Hong Kong.
Another Sindhi success story is Melcom, which runs the largest chain of department stores in Ghana. While the current retail business was started in 1989, the Khubchandanis’ Africa adventure began way back in 1929. That’s when 14-year-old Ramchand Khubchandani arrived in the Gold Coast (as Ghana was then called), in search of a better life. His son Bhagwan, 72, is the group chairman now.
Ask any old-timer what is was like back then and he will shrug, “It was tough.” Food was the biggest problem. “I learnt to live on bread, potatoes and meat,” says Mohinani. Things are not that much better now for the casual Indian visitor. Fufu (a kind of cassava upma) is where your taste of ‘local cuisine’ begins and ends. But worry not if you have a kitchen. For everything from hing to Haldiram bhujiya is available.
The Indian population in Ghana is around 20,000. These are not just Sindhis but include a new breed of professionals. Olam is one such large and high-profile employer. Established in 1989 in Nigeria by the Kewalram Chanrai group, one of the oldest Indian families in Africa, it is a SGD17.1 billion company listed on the Singapore stock exchange. It is run by professionals, mainly IIM, IIFT, IRMA graduates.
An expat salary is what draws professionals to Africa; the role and responsibilities they shoulder make it hard to return. Almost every Olam manager I met said he thought it would be a 2-3 year stint but it’s been 10, 12 or 15 years now. At Olam, a fresh MBA handles a $40 million business with 60-70 people reporting to him. Top perfomers can aspire to one day become a ‘country manager’ in one of the 65 sovereign states Olam operates in; 24 of these countries are in Africa.
Other well-known Indian names in Ghana include Tata Motors and Shapoorji Pallonji (my driver knows it as the Indian company which built the ‘President House’). That was in 2006, at a cost of $72 million. But the most visible Indian presence is in education; you cannot miss the NIIT and Sikkim Manipal University (SMU) billboards on Ring Road Central. Started in 2008, SMU Ghana has a strength of 3,000, including students from neighbouring countries.
And the wheel is once again turning full circle. Soumya Patnaik left the Apeejay Institute of Management to teach at SMU Ghana. Last year, he teamed up with Girish Lalwani, a former centre manager at NIIT Ghana, to set up Mahatma Gandhi University as well as a software company — both in Accra. Getting accreditation has not been easy but the young entrepreneurs plodded on and today have over 500 students.
Vipul Jain, 33, is another success. Joining Olam straight from the IIFT campus, he quickly became a star performer. But in 2010, he started FnJ Investments, which now competes with Olam in commodity export and rice import, and has carved out its own niche and a turnover of $60 million.
Today, Ghana is a fast-growing and stable economy. But old timers recount the years of political turmoil (1978-88). The Khubchandanis had to shift to Hong Kong, while Mohinani spent a month in jail. When the turmoil subsided, the Khubchandanis returned. Mohinani lost a factory, but not his faith in Africa. Mera joota hai Japani, passport Hindustani, magar dil ab Afreekan.