New Delhi [India], February 19 (ANI): After facing some difficulty to board the Air India flight to Bhopal from the Indira Gandhi International (IGI) on Friday for carrying her shooting equipments and ammunition, India shooter Manu Bhaker thanked Union Minister for Youth Affairs and Sports Kiren Rijiju for helping her board the flight.
"Thank you @KirenRijiju sir. Got boarded after strong support from all of you. Thank you India," Bhaker tweeted.
Earlier, in a series of tweets, she complained about the Air India officials for not behaving properly with her and not allowing her to board the flight with weapons and ammunition despite having the valid documents and Directorate General of Civil Aviation (DGCA) permit.
Taking to Twitter, the 19-year-old shooter, who was travelling to Bhopal for training at Madhya Pradesh Shooting Academy, said she was not happy with the Air India officials as they were rude to her and even asked for money.
"IGI Delhi. Going to Bhopal (MP Shooting Academy For my training I need to carry weapons and ammunition, Request @airindiain Officials to give little respect or at least don't Insult players every time & please don't ask money. I Have @DGCAIndia permit @HardeepSPuri @VasundharaBJP," Bhaker tweeted. 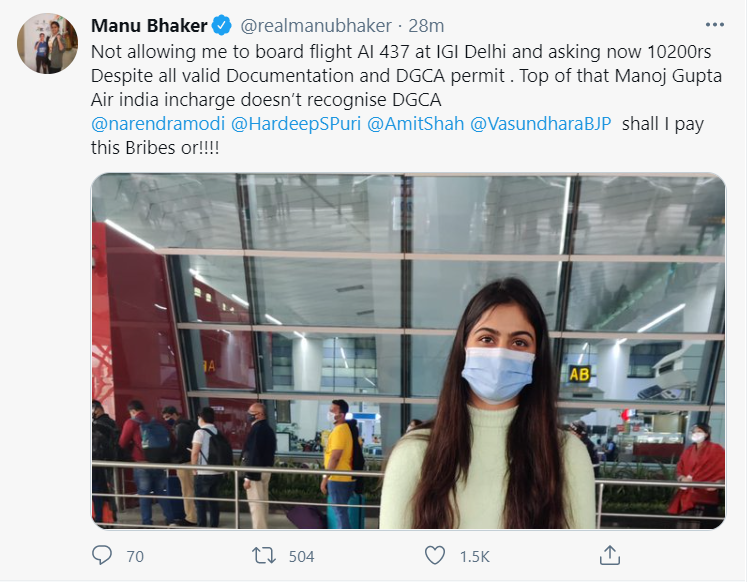 "Not allowing me to board flight AI 437 at IGI Delhi and asking now 10200rs Despite all valid Documentation and DGCA permit. Top of that Manoj Gupta Air India incharge and other staff is humiliating me despite I have 2 guns and ammunition," she added. 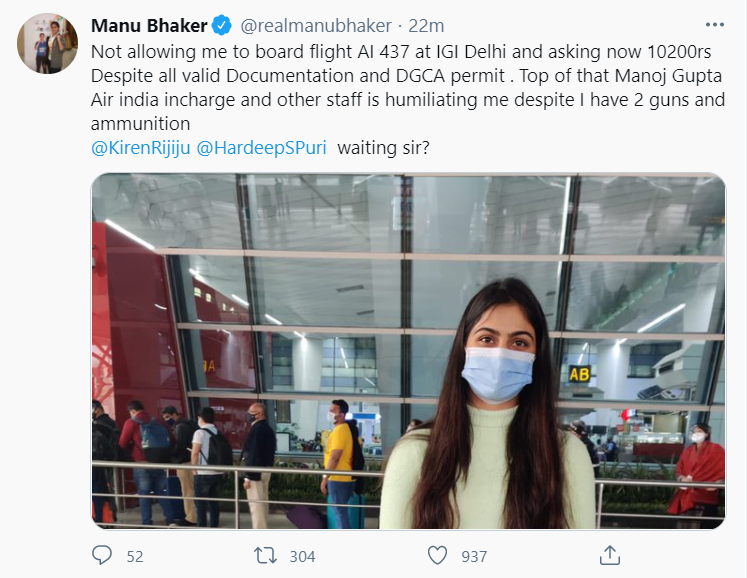 "Think this type behaviour is not acceptable. Manoj Gupta is not even human. He is treating me like I am a criminal. Also his security incharge Such people need basic training of behaviour hopefully Aviation ministry will find out & will send him to right place @HardeepSPuri," she tweeted. 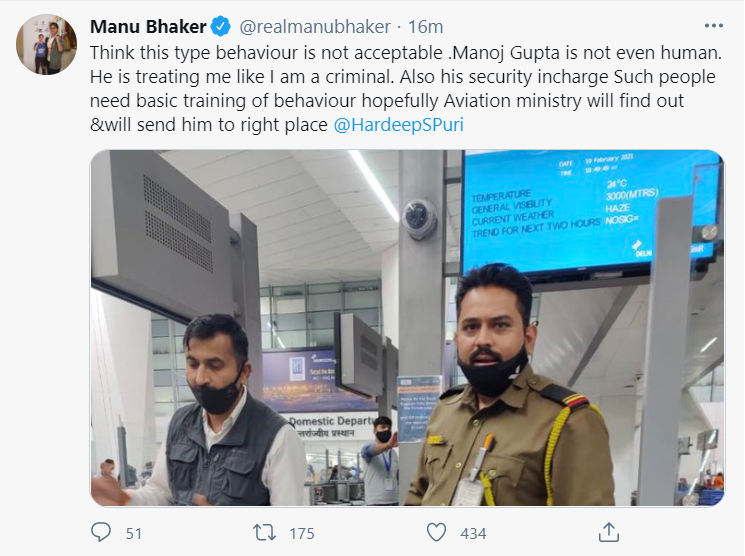 Later, Air India issued a clarification and said the officials only asked for the "valid documents as per rules" and no one asked for a bribe as alleged by the shooter.
"Dear Bhaker Our Delhi Airport team has confirmed that the official at our counter had only sought for valid documents as per rules for carriage of your weapon on board. In absence of the same, legitimate specified charges for the arms were conveyed to you. No one sought a 'bribe' as has been alleged. You were issued boarding pass on your assurance of furnishing valid documents before boarding," Air India tweeted.
"Immediately after the official valid documents were shown by you at the boarding point, u were allowed to board. It may please be noted that Air India has always encouraged and respected Sportspersons and have many an eminent sports legends working with us," it added.
Bhaker recently won the bronze medal in the Women's 10M Air Pistol event at the first Asian Online Shooting Championship. She shot 578 to finish behind two Iranians. Haniyeh Rostamiyan shot 580 for gold while Sebghatollahi Golnoush was a point behind for second place. (ANI)