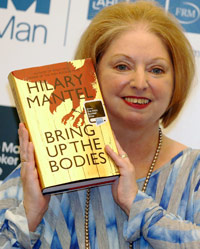 08 November, 2014
Print this article Font size -16+
Hilary Mantel wrote herself into the history books on 16 October, becoming the first woman and first Briton to win the coveted Man Booker prize for fiction twice with Bring Up The Bodies, the sequel to her acclaimed Wolf Hall. Two men had previously "done the double" — J.M. Coetzee who was born in South Africa and Australia's Peter Carey.
Chair of judges Peter Stothard described Mantel as the "greatest modern English prose writer" and told reporters she had rewritten the art of historical fiction. Wolf Hall, her re-imagining of the rise of blacksmith's son Thomas Cromwell to the pinnacle of power in King Henry VIII's court, won the 50,000 pound ($80,000) prize in 2009. Bring Up The Bodies, published by HarperCollins imprint Fourth Estate, picks up the action in 1535 with Anne Boleyn's spectacular fall from grace and execution the following year.
"Well, I don't know, you wait 20 years for a Booker prize and two come among at once," Mantel joked as she accepted her award in the medieval splendour of the Guildhall banqueting hall in central London.
There could yet be a third Booker prize for Mantel. The final part of her epic trilogy, called The Mirror and the Light, is expected to hit shelves in 2015. "I have to go away and write the third part of the trilogy. I assure you I have no expectation that I will be standing here (again)," she told an audience of fellow nominees, publishing executives and London's literati.
Stothard, who is editor of the Times Literary Supplement, likened the character of Cromwell to Don Corleone of the famous "Godfather" film series. "If you are looking for comparing it with things, you can see as much Don Corleone in this book as D.H. Lawrence," he said. "There is certainly a Godfather element to this book including ... the moral ambiguity of the Don Corleone/Thomas Cromwell figure."
Spending Prize Money On 'Rehab'
Asked in 2009 what she would spend her prize money on, Mantel replied: "Sex and drugs and rock and roll." Asked the same question in 2012, she joked: "Rehab," before adding: "I'm afraid the answer will be much duller this year. My pension, probably."
Mantel, now 60, came to literary and commercial fame relatively late in her career, but said she never felt in competition with the likes of Martin Amis and Ian McEwan. She also played down some of the acclaim she had won since her first Booker triumph.
"I remember in 2009 someone said, 'Do you realise that tonight you're the best writer in the world?' and I thought 'Oh how absurd, it's not the Olympics, it's not a competition'. "You are only as good as your last paragraph and I haven't even written one of those today."
The author added that a stage version of her Cromwell novels was in the works, as was a six-part BBC television series. Mantel and her publishers turned down offers of a Hollywood adaptation, however, due to the subject matter's complexity.
Also on the shortlist this year, and joint favourite, was Will Self's Umbrella, a modernist tale about Audrey Death, a woman who falls into a coma at the end of World War One only to be awoken decades later when Dr Zack Busner discovers a cure.
Up against the literary "establishment" were two first-time novelists — Alison Moore for The Lighthouse and Indian writer and poet Jeet Thayil for Narcopolis. Malaysia's Tan Twan Eng made it to the Booker longlist with his first novel The Gift of Rain in 2007 and was shortlisted in 2012 for The Garden Of Evening Mists. Swimming Home by playwright and novelist Deborah Levy explores the devastating effect depression can have on apparently stable people.
As well as the prize money, the winner of the Man Booker prize awarded to an author from the Commonwealth, Zimbabwe or Ireland for a novel written in English is virtually guaranteed a significant spike in sales.
Research by the Guardian newspaper showed that Mantel's Wolf Hall sold 35,900 copies before the award was announced and nearly 600,000 afterwards.
(Reuters)
Tags assigned to this article:
books fiction bwbooks 7 man booker prize authors corner hilary mantel wolf hall bring up the bodies