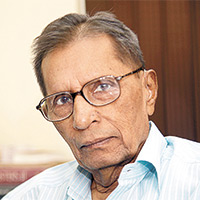 08 November, 2014
Print this article Font size -16+
Back in 1907, there was a major crash in the US equity market. The Federal Reserve was not in existence then, and J. Pierpont Morgan, a banker, was spearheading the effort to support the market. One evening, newspaper reporters asked him what he expected would happen to stock prices the next day. The great man is supposed to have pondered over the question for a few minutes, before gravely replying: “They will fluctuate.” That statement applies to the rupee’s exchange rate over 2014.

We formally adopted a floating exchange rate as part of economic reforms in the early 1990s. In practice, the central bank was trying to keep the real, that is, inflation-adjusted exchange rate reasonably stable though intervention, for the next decade and a half. The external deficit remained low, after a few years of surplus in early 2000. Empirical evidence suggests that a major change was made in 2009: the central bank practically stopped intervening in the market, though there has never been any public announcement of the change.

Looking forward to 2014: will the new government review the floating rate policy in the light of our experience? Is it the optimum regime for an economy that needs a sharp hike in output and employment, if only to maintain social stability?

For many years, we have had higher inflation in comparison with our major trading partners and competitors in third markets. And, an appreciation of the real exchange rate is as deflationary as high interest rates, a reality often overlooked by the business media (and business leaders). In an increasingly globalised economy, the real exchange rate matters both to growth and the external balance.

In the last fiscal year, we incurred an unsustainably large current account deficit — almost 5 per cent of GDP. The focus of the policy makers since then has been far more on financing the deficit rather than curtailing it. On the latter, the only step taken is the import duty hike on gold. It may well lead to increased smuggling, financed by diversion of remittances through the illegal hawala market.

While the Q1 numbers in the current year were equally bad, Q2 has evidenced a sharp drop in the deficit because of improvement in exports and lower imports, particularly gold. Remittances also do not seem to have been affected significantly; it perhaps takes time for the smuggling and financing channels to be established: they functioned beautifully for 40 years when import of gold was banned (remember that 20 million marriages a year in India, and the purchase of an average of 4 tolas of fresh gold each, translates into 900 tonnes of annual demand).

Export growth does bear out the fact that the fall of the rupee from around Rs 45 to a dollar to around Rs 62 at the time of writing has helped push growth. Indeed, the fall of the rupee is a little more than the inflation differential over the past two and a half years. The big question for 2014 is whether the fall is enough for our tradables sector to be globally competitive. Back in 2002, the exchange rate was over Rs 49 to a dollar, and the external account was in reasonable balance. Taking that as the starting point suggests that the rupee is still significantly overvalued in real terms. And, the inflation differential remains as high as ever.

Meanwhile, tax cases, environmental regulations and court judgments are all discouraging long-term investment capital — and we are taking increasing recourse to importing short-term finance capital to bridge the gap. Will a change in US monetary policy be a major influence? It could, as our exchange rate is hostage to the investment decisions of a few dozen fund managers outside India. There is also the risk of populist fiscal policies in the pre-election months leading to a downgrade of our rating.

At one time, we were a proud member of the Bric (Brazil, Russia, India and China) Group of fast-growing emerging markets; have we now joined Bits (Brazil, India, Turkey and South Africa) — all of whom have significant imbalances on the external account? It is worth reminding ourselves that over the past 60 years, all the economic miracles — Germany and Japan in the post-war decades; Korea and Taiwan later; and China over the past three decades — have been underpinned by managed exchange rates and a rapid export-based growth of the manufacturing sector. There is no record of a country having grown fast on the basis of importing finance capital and a stagnant manufacturing sector.

The author is a forex and treasury risk management consultant