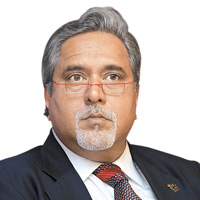 08 November, 2014
Print this article Font size -16+
IT was on 28 October, at the F1 race venue in Noida, that UB Group chairman Vijay Mallya gamely declared that his group was sufficiently cash-generative to fund the ailing Kingfisher Airlines (KFA). He beamed: “The crisis has not meant that I have had to sell my family silver to fund the airline.” Barely a fortnight later, Mallya seemed to do exactly that by selling 53.4 per cent stake in group firm United Spirits (USL) — the world’s largest spirits producer by volume — to British alcoholic beverages giant Diageo. Both firms said the deal is likely to be sealed by the first quarter of 2013.
The multi-layered deal, valued at an estimated Rs 11,167 crore ($2.1 billion), is expected to ramp up the ailing finances of the group, cushioning KFA’s accumulated losses and debt amounting to Rs 17,000 crore in all. Mallya had given personal guarantees for some of KFA’s debt. The deal has been in the air since 24 September when both the firms said they were in talks. It was six years ago that Diageo made its first move to woo USL.
Mallya, who will continue to be the chairman of USL, however, insisted that he had not sold the family silver but only embellished it. Both firms did not disclose how many seats each would have on the USL board. Diageo’s chief operating officer Ivan M. Menezes said India would now be its second largest market and it would consolidate USL’s numbers under its own balance sheet.
Diageo will initially buy 27.4 per cent stake — through a mix of direct acquisition of shares and  preferential allotment — for Rs 5,725 crore, of which USL will get Rs 3,300 crore and Rs 2,400 crore will go to UB Holdings (UBHL). Diageo will also make an open offer for another 26 per cent from public shareholders. Mallya’s UBHL will hold 14.9 per cent in the company, though he did not clarify how much of it would be his personal holding.
But this deal is unlikely to benefit KFA. “There is no cross-contamination. Each business is run as independent outfits,” says Mallya. “The fine details have yet to be studied, but Diageo picking up the stake was a long-term positive for USL, though other UB group companies might not benefit much,” says an analyst.
In the event that the preferential allotment to Diageo is opposed by USL shareholders, UBHL will sell its shares in USL to Diageo at Rs 1,440 per share to ensure that the latter has a minimum shareholding of 25.1 per cent. Further, if these do not result in Diageo holding a majority stake in USL, UBHL has agreed to vote its remaining shareholding in USL as directed by Diageo for a four-year period. UBHL will also vote its USL shares to enable Diageo to ensure that its nominees are appointed to the USL board. All this caveats will ensure Diageo’s control of USL.
The two firms also said they would form a 50:50 joint venture that will own the United National Breweries’ traditional sorghum beer business in South Africa.
Mallya was keen to emphasise that the deal with Diageo was a partnership, though it increasingly looks like India’s liquor baron and ‘the king of good times’ has sold the family crown jewel to save his empire. The key question is: Will the deal help Mallya set his house in order.