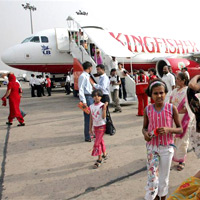 08 November, 2014
Print this article Font size -16+
With employees threatening to move court for closure of the company, Kingfisher Airlines chairman Vijay Mallya finally broke his silence through a letter to his employees saying the management is making every effort to restart operations.
At the same time, Mallya urged the employees to be careful in their interaction with the media, alleging "negative reporting" by media on the carrier.
The employees of the grounded Kingfisher Airlines, who have not been paid for eight months now, had yesterday threatened to file a winding up petition in the court under the Company's Act, if the management did not share its revival plan with them.
"We have submitted a detailed restart plan to the DGCA which is in two parts. The first part deals with a limited re-start utilising 7 aircraft ramping up to 21 aircraft in 4 months. The second part is a full scale rehabilitation of our airline growing to 57 aircraft within 12 months of recapitalisation," Mallya informed his employees in the letter.
The letter, however, did not mention anything about the payment schedule of dues of the employees, but it said that "both plans contain detailed information on key assumptions and funding requirements, including payment of outstanding salaries to employees."
The airline has not paid to its employees since May last year.
Appealing the employees to be "careful" in their interaction with media, Mallya alleged in the letter that the media has continued their negative reporting on Kingfisher.
Kingfisher management had promised the employees that their dues till June will be paid by December last year.
However, it failed to meet the deadline. The commitment to the employees had come following a two-month strike by its engineers and pilots over non-payment of dues.
Earlier Kingfisher had said that while the March salary would be paid within 24 hours, the April salary would be paid by 31 October, May dues before Diwali in mid-November and June salary by December end. The salary dues from July to September would be paid by March next year after recapitalisation of the airline.
Kingfisher, whose flying license (Scheduled Operator's Permit) expired on December 31 last year, had last month submitted a revival plan to the regulator DGCA. The DGCA, however, did not accept it and asked to furnish additional details.
Kingfisher is burdened with a loss of Rs 8,000 crore and a debt burden of another over Rs 7,524 crore, a large part of that has not been serviced since January.
(PTI)
Tags assigned to this article:
india leadership news 7 aviation vijay mallya bankruptcy dgca kingfisher airlines kingfisher kfa