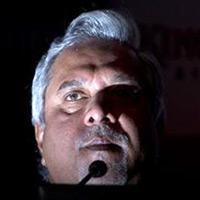 The liquor and aviation tycoon, no longer a billionaire according to the latest Forbes list, flew in from London on his private Airbus after suggestions that he might stay away to avoid having it impounded.

"Was there any doubt about my presence here?" he told Reuters, minutes after walking through the paddock turnstiles with cars roaring around the Buddh circuit as final practice got under way.

Mallya's Kingfisher Airlines had its licence suspended by India's civil aviation authorities last week and has not flown since the start of October after a protest by employees, unpaid since March, turned violent.

The airline has never turned a profit and, according to the consultancy Centre for Asia Pacific Aviation, has total debt estimated at about $2.5 billion.

Mallya has not been seen in India for weeks and the airlines troubles, as well as a threat of protests by Kingfisher employees outside the Formula One circuit, have led to speculation about whether he would return for the race.

"You believe that Indian papers have any credibility?," said Mallya, bristling when asked about the recent coverage of his affairs.

"There is no libel law in India so there is nothing you can do to bring them to book," he added, accusing his media critics of 'cooking up sensational headlines daily' and writing nonsense.

"Obviously if I am not at my home grand prix, why should I be anywhere else?"

Rebukes Doubters
Mallya is an important figure in Formula One, a longtime friend of F1 supremo Bernie Ecclestone and sitting on the governing International Automobile Federation's world motor sport council.

He was also instrumental in bringing the sport to the country and co-owns the first and only Indian-licensed team.

"Why should there be even one iota of doubt that I wouldn't be here? I just don't understand it," he said. "Kingfisher Airlines is a Plc. They (the local media) don't understand the concept of a Plc.

"In a Plc where is one man, who might be the chairman, responsible for the finances of the entire Plc? And what has it got to do with all my other businesses? I have built up and run the largest spirits company in the world in this country."

Asked whether he had flown to India on his plane, Mallya vented more frustration.

"You are probably referring to my plane being seized? Wonderful. I don't owe anybody money," he said. "Why should my plane be at risk. It's so stupid."

Asked about the Diageo talks, Mallya said no deal had been done yet: "Whenever we need to say something we will, we keep discussing but we don't know whether a deal will happen or not," he added.

Russian fiasco in Ukraine and the future of warfare