New Delhi [India], February 5 (ANI): Just days ahead of the planned release of their much-loved web-show 'The Family Man' season 2, filmmakers Raj and DK on Friday announced that the release of the show is being pushed back.
The filmmakers shared the update on Instagram and announced that the show which was scheduled to premiere on February 12 will now stream on Amazon Prime Video this summer.
"We know you have been eagerly waiting for the new season of The Family Man. We are truly grateful and humbled by all the love! We have an update for you," the statement from Raj and DK read.
"The Family Man Season 2 will premiere on Amazon Prime Video this summer! We have been working super hard to get you a kickass season. And we are pretty sure you will love it. Can't wait to bring it to you," the statement further read.
Last month, Amazon Prime Video had announced that the much-awaited Manoj Bajpayee starrer show will release on February 12 on the streaming platform. 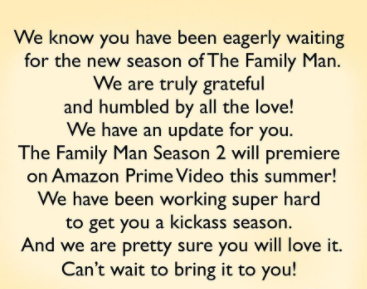 'The Family Man' is an edgy, action-drama series, which tells the story of a middle-class man, Srikant Tiwari, portrayed by Bajpayee who works for a special cell of the National Investigation Agency (NIA).
The series revolves around Srikant's tight-rope walk as he struggles to strike a balance between his secretive low paying, high-pressure, high-stakes job and being a husband and father or a 'family man.'
The series has been created and directed by Raj and DK and will see Bajpayee and JK Talpade reprising their roles along with Priya Mani and Sharad Kelkar. The new season of the show will see Srikant Tiwari (Bajpayee) and Sharib Hashmi (Talpade) taking on a bigger and deadlier mission.
The series also marks the digital debut of southern superstar Samantha Akkineni in a never-seen-before avatar. (ANI)