New Delhi [India], January 19 (ANI): Taking cognisance of the concerns expressed by viewers against his Amazon Prime Video-based show 'Tandav,' filmmaker Ali Abbas Zafar on Monday extended apologies through an official statement.
Zafar's debut web-series 'Tandav' had been mired in controversy since its release as several viewers said the content hurt religious sentiments.
The 'Sultan' filmmaker shared the official statement from the "cast and crew of Tandav" on Twitter and wrote "Our sincere apologies" along with it.
Through the statement, Zafar shared that the Ministry of Information and Broadcasting had informed him about a large number of viewers filing petitions against the show.
"Official statement from the Cast & Crew of Tandav. We have been closely monitoring viewer reactions to the web series 'Tandav' and today during a discussion," the statement read.
"The Ministry of Information and Broadcasting has informed us regarding a large number of grievances and petitions received on various facets of the web series with serious concerns and apprehensions regarding its content hurting the sentiments of the people," the statement further read.
He also clarified that the web series is a "work of fiction" and that the cast and crew of 'Tandav' did not have any intentions of hurting sentiments of any community, caste, or religion. 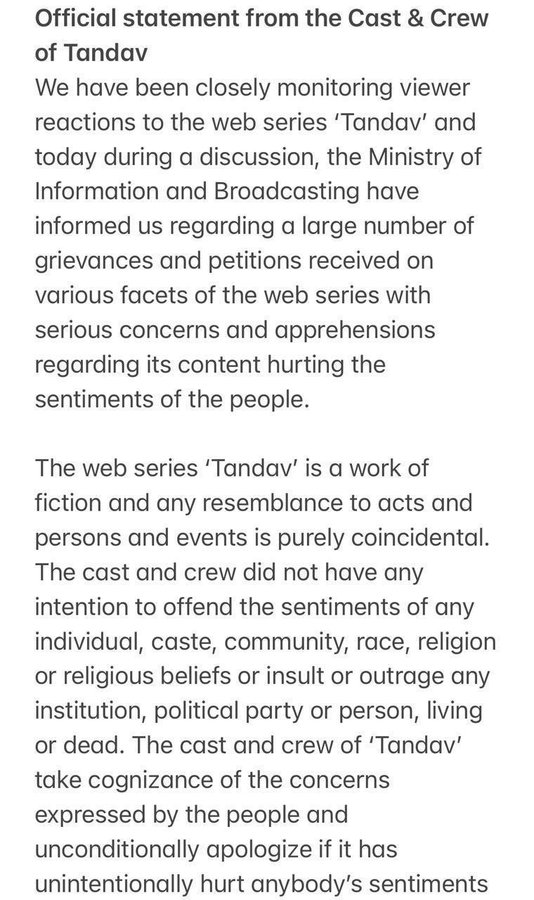 "The web series 'Tandav' is a work of fiction and any resemblance to acts and persons and events is purely coincidental," the statement read.
"The cast and crew did not have any intention to offend the sentiments of any individual, caste, community, race, religion or religious beliefs or insult or outrage any institution, political party or person, living or dead," the statement further read.
Zafar ended the statement by taking cognizance of the concerns expressed by people and apologizing if the show "unintentionally" caused any hurt to the viewers.
"The cast and crew of 'Tandav' take cognizance of the concerns expressed by the people and unconditionally apologize if it has unintentionally hurt anybody's sentiments," the statement read.
Earlier in the day, an FIR was registered at Lucknow's Hazratganj Kotwali against Amazon Prime's India head of original content Aparna Purohit, Zafar, producer of the show Himanshu Krishna Mehra, writer Gaurav Solanki and others for allegedly hurting religious sentiments.
The Information and Broadcasting Ministry has summoned Amazon Prime Video officials in India in connection with the controversy around the web series 'Tandav', sources had said on Sunday.
This comes after two Bharatiya Janata Party (BJP) leaders alleged that the Saif Ali Khan-starrer web series 'Tandav' hurts Hindu religious sentiments. (ANI)