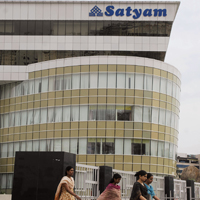 The company, now called Mahindra Satyam, is in the last lap of a merger with parent Tech Mahindra Ltd. Profits for the December quarter rose to Rs 374 crore from Rs 310 crore a year earlier, the company said on 31 January. That compares with analysts' estimate of Rs 281 crore, according to Thomson Reuters I/B/E/S.

Profit after the one-off loss of Rs 294 crore was Rs 80 crore, Satyam said.

Satyam paid $68 million to Aberdeen Global and 22 funds to fully settle claims related to an accounting fraud that led to the sale of the Hyderabad-based company to Tech Mahindra, the company had said on December 13.

Satyam was sold in a government-backed auction in 2009 after its founder and former chairman admitted to one of the country's biggest accounting frauds.

A surprise increase by second-ranked Infosys in revenue forecast for the current fiscal year and strong earnings at top-ranked Tata Consultancy Services earlier this month prompted speculation of a pickup in outsourcing spending in the sector's biggest market, the United States.

Such a pickup would help Satyam's parent Tech Mahindra accelerate its growth towards its aim of doubling consolidated revenue to about $5 billion in 2015. The combined company would be India's fifth-largest software services provider, with customers such as BT Group PLC and SAAB AB.

Tech Mahindra owns close to 43 percent of Satyam. It is offering one share in itself for every 8.5 shares of Satyam to absorb the company. The merger may be complete by March, the company had said.