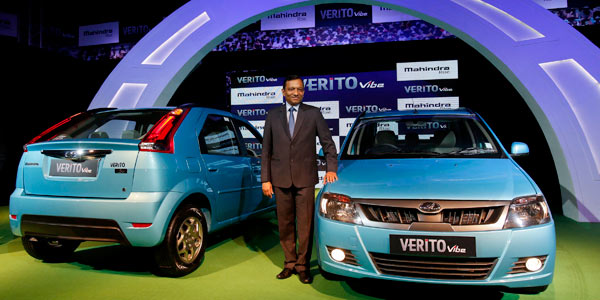 08 November, 2014
Print this article Font size -16+
Mahindra and Mahindra, India's largest sports utility vehicle maker, has made its first push into the country's small car market a week after warning that fierce competition could erode its dominant SUV position.

SUV sales have been a strong point for some manufacturers in India over the past year, even as sales of the smaller cars that account for most of the passenger vehicle market slumped.

Having a presence in the small car market will be a positive if demand returns in the next fiscal year, but Mahindra will have to compete with established brands such as Maruti Suzuki India Ltd and South Korea's Hyundai Motor Co.

On Wednesday, Mahindra launched the Verito Vibe, a compact version of its sedan, at a starting price of Rs 5.63 lakh — among the cheapest of its passenger vehicles.

The flagship company of the $16 billion Mahindra Group builds every other SUV sold in India, but its share in the segment fell to 48 per cent in the fiscal year that ended in March from 56 per cent a year earlier, according to data from the Society of Indian Automobile Manufacturers (SIAM).

In the passenger car segment, which excludes utility vehicles and vans, the company last year held less than 1 percent of the market that is dominated by Maruti Suzuki.

Key to Mahindra holding its market share is not a small car but more SUV launches, some analysts say.

"Mahindra will continue to lose market share in the overall passenger vehicle industry, because of lack of new launches (by Mahindra) in the SUV segment and an extremely competitive environment thanks to launches by their competitors," said Yaresh Kothari, an auto analyst with Mumbai-based Angel Broking.

Renault SA's Duster has become popular in India since its introduction last year, and Mahindra must also compete with automakers including Ford Motor Co and Japan's Nissan Motor Co Ltd, both of which are expected to launch SUVs this year.