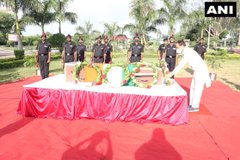 Earlier in the morning, Chouhan paid tribute to Sepoy Manish who had sustained burn injuries in a terror attack in Baramulla and later succumbed to his injuries at a hospital on August 23. (ANI)