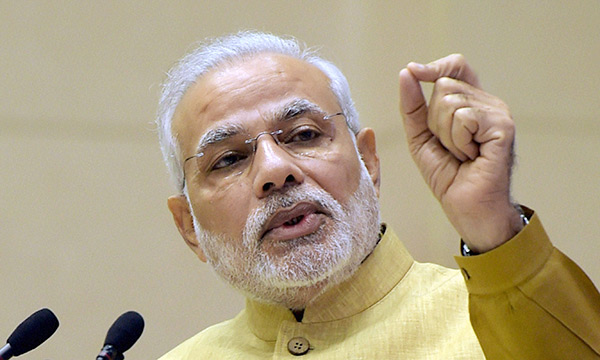 01 July, 2015
Print this article Font size -16+
Reliance Industries plans to invest about Rs 2.5 lakh crore ($39.3 billion) in digital initiatives, chairman Mukesh Amabani said on Wednesday (01 July).
He did not give a timeline.
Ambani, India's richest man, was speaking at the launch of the Union government's "Digital India Week", which is part of a campaign to provide fast internet connections for all.

Aditya Birla Group will invest Rs 44,500 crores in the next five years in network rollout and infra and digital space, group chairman Kumar Mangalam Birla said.
Anil Ambani's Reliance Group committed to invest about Rs 10,000 crore over the next few years to expand its presence across digital, cloud computing and telecom space.
India is reinvigorating an $18 billion campaign to provide fast internet connections for all, with a "digital week" aimed at popularising Prime Minister Narendra Modi's campaign promise to connect 250,000 villages in India by 2019.
Prime Minister Narendra Modi described Digital India as a roadmap to change India's future. "Earlier, a child used to playfully wrench your reading glasses", he said, "today, he reaches for your phone. We need to understand this change or the world will pass us by."
He further said that E-Governance is going to change into M-Governance, adding with a smile, "M is not Modi Governance, it is mobile governance."

Modi shared his vision of a digital India where advancements in technology and connectivity will make an impact on all aspects of governance and improve the quality of life of citizens.
Satya Nadella, CEO, Microsoft, conveyed his support to the Modi government’s progressive outlook via a video message.
He said: "Microsoft is proud to be a part of Digital India launch and believe that technology can uniquely support the government’s initiatives in key areas including: rural internet connectivity, digital cloud services for all it’s citizens, and communications and productivity services for the government. At Microsoft, our focus is on empowering every person and every organization on the planet to achieve more."
The government's tech push, which plans to provide electronic governance and universal phone connectivity across the country, aims to bridge India's digital divide, bringing in large investments in technology manufacturing.
"Now we are at a place where we can take off," said a spokesman for Communications and Information Technology Minister Ravi Shankar Prasad. "The idea is to bridge the gap between haves and have-nots of services and deliverables."
The plan aims to stop net imports of technology and electronics by 2020, while creating over 100 million jobs.
India's first cyber premier, Modi has used social media and particularly Twitter, where he has 13 million followers, to style himself as a leader in touch with technology.
With a growing economy and falling handset prices, India is one of the fastest growing smartphone markets in the world, and Modi is looking to harness India's potential for social development in fields like education and health.

Chandan Chowdhury, Managing Director-India, Dassault Systemes, said: “The Digital India Initiative is a welcome move by the government to take India closer to becoming a digitally empowered society and a more robust knowledge economy. The initiative will facilitate greater inclusiveness and connectivity of individuals with relevant information and resources for their benefit. Projects such as Digital Locker System, Swachh Bharat Mission (SBM) Mobile app, MyGov.in are all efforts towards bridging the digital gap in our country. Today, we thrive in the age of consumer experience, and digital India initiative through various programmes is focusing on offering a high end experience. The initiative will enable  people to get engaged in the  innovation process-it’s the next level of growth which the economy will need to move to.”
But apart from a handful of headline-grabbing initiatives - free wifi at the Taj Mahal, for example - the push to connect India and drive a national fibre optic network, first approved by the last government in 2011, has made slow progress.
Praveen Sinha, MD & Co-Founder, Jabong.com, said: "The Digital India initiative undertaken by the Prime Minister is a brilliant step towards transforming India into a connected knowledge economy. The initiative will also be beneficial for the private sector. The e-commerce industry in particular will witness a surge through this initiative as it aims to provide internet access to all and it also will educate people about net banking which in turn will allow one to buy products online even in the remotest corners of the country."

Modi, who has been named chairperson of a high-powered monitoring committee and all existing and ongoing e-governance initiatives, unveiled a logo for Digital India.
Prakash Sangam, CEO, RedBus, said: "The initiatives in the new digital era will empower India and its citizens, open up new opportunities and accelerate economic growth"
Tags assigned to this article:
Digital India week narendra modi mukhesh ambani aditya birla Anil Ambai technology it